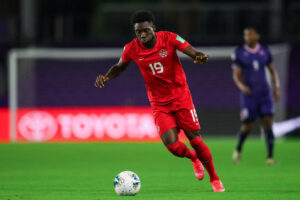 Unfortunately, Alphonso Davies got myocarditis, which is an inflammation of the heart muscle. This was after testing positive from COVID-19 one-two weeks ago (according to The Canadian Press). This means that he will miss the next three games for the CanMNT.

Alphonso Davies is out of the January-February window

Alphonso Davies has temporarily stopped training after being diagnosed with mild myocarditis, an inflammation of the heart muscle.

Alphonso Davies will miss the January-February window because of myocarditis. It is a minor form of myocarditis, however, according to The Associated Press, it is a heart muscle issue. Anything regarding the heart though can be a major issue. Former Mali International Ousmane Coulibaly suffered a heart attack according to France 24. Fortunately, Coulibaly was stabilized in hospital and is alive.

However, given time, Davies should be fine according to the GOAL. This is what Bayern boss Julian Nagelsmann said about the situation:

“This myocarditis isn’t too dramatic based on the ultrasound, but more simply signs of inflammation. Nevertheless, it needs to heal and that will no doubt take some time.”

What does this mean for the CanMNT?

However, this is something Canada can overcome. They have several very good players on the team. This includes players like Jonathan David and Cyle Larin, who scored all three of Canada’s goals in the November window (Costa Rica and Mexico). They also made the 2021 Concacaf Gold Cup semifinals round without the services of Davies.

There are players with tremendous speed like Richie Laryea and Tajon Buchanan, who are both now playing in Europe. Laryea can also play left-back, which could help fill the void with the left-back position that Davies occupies. Also, there is Sam Adekugbe, who played well in the November window.

As for Davies status after the January-February window, this is what Dr. Bogoch said on Sportscentre:

“Most of these cases would be mild they will resolve rather quickly and most people will back in full functionality in a short time.”

Now, Bogoch did say that in rare cases, there are more severe cases of myocarditis. However, as of right now, it does not seem like this will be a condition that will hold down Davies for long.

The post Alphonso Davies sidelined for the CanMNT because of myocarditis appeared first on Last Word On Soccer.