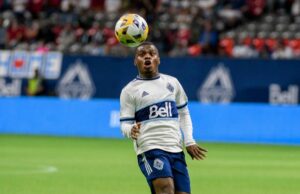 VANCOUVER – It was a beautiful, sunny Saturday afternoon in Vancouver. Perfect for a fixture a long time in the making. Vancouver Whitecaps were a completely different team the last time they played a home opener, with many players, coaches, and front office personnel from 2020 no longer with the team.

All square between Vancouver and NYCFC in Scoreless Draw

They welcomed reigning MLS Champions New York City FC to BC Place, for just the sixth ever clash between the two sides. New York were out for revenge after allowing a 90th minute winner against the LA Galaxy on Opening Day. Meanwhile the host Whitecaps aimed to right the ship following their 4-0 defeat in Columbus.

For Vancouver, Vanni Sartini resorted to a 3-4-1-2, a much more defensive look compared to last weekend’s 3-1-4-2. Thomas Hasal started in goal, sitting behind Florian Jungwirth, Ranko Veselinovic and Tristan Blackmon. Last season’s dynamic duo start together again for the first time in 2022, with Russell Teibert and Leonard Owusu pairing in the centre. Cristian Dájome and Christian Gutierrez lined up on the flanks. To complete the line up, Ryan Gauld started back in his usual #10 role, behind Lucas Cavallini and Deiber Caicedo. Brian White started on the bench, making his first team sheet appearance since a pre-season foot injury.

Meanwhile, New York also fitted themselves with a handful of changes. It was a back four of Maxime Chanot, Alexander Callens, Malte Amundsen and Trayvon Gray. Alfredo Morales and Maximiliano Moralez welcomed Keaton Parks to the midfield, replacing Nicolas Acevedo. The front three consisted of Talles Magno, Valentin Castellanos and Thiago Andrade, all in front of the ever-reliable Sean Johnson in goal.

A flurry of chances in the opening minutes forced Hasal into action with a number of saves from inside the box. A headed chance for Callens grazed the bar at the 15th minute mark. Gray was rocked to leave the match in the 21st minute after going down awkwardly from a challenge, with Andres Jasson entering the game. A few opportunities for Gutierrez, Cavallini and Dajome all started to swing the game back into balance through the first half an hour.

We’re knocking on the door early

It would remain scoreless through the opening 45 minutes, with New York dominating play. Dictating the game with 69% possession, the visitors were clearly the better team. After mustering up 12 shots,  the visitors were being denied time and time again by either Hasal, a swarming army of defenders, or purely missing the target.

Vancouver looked good in spells, generating a few chances of their own. Lucas Cavallini in particular stood out for the hosts, both on and off the ball. It was also an impressive first half showing from Moralez, who’s relentless work opened numerous chances for Magno, Andrade and Castellanos.

A much slower and evenly matched second half followed, with very few clear-cut chances for either side. A strong wrist from Thomas Hasal in the 88th minute ensured Vancouver hold on to a clean sheet.

Vancouver managed to greatly improve upon their Opening Day performance on Saturday’s home opener. A strong defensive effort, in part due to their defensive formation. The middle of the field flowed more smoothly, with the wingers and strikers getting much more service than a week ago. It wasn’t pretty by any means, but nicking a point of the defending champions is a point well earned. Things will still have to be worked on during the week, especially in the ball retention area. A trip to Houston lays ahead of them next week to take on the Dynamo.

For New York, it’s two games without a win to open their title defence campaign. To pair with that, it’s zero goals scored as well. Everything was clicking for the visitors, except the final step of the process. It was an improved showing from New York, however next week has them face Comunicaciones from Guatemala in the Champions league Quarter Finals. After that, they are back on home soil to welcome Montreal to town on Saturday March 12th.

The post All square between Vancouver and NYCFC appeared first on Last Word On Soccer.