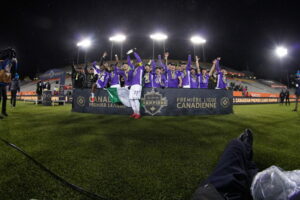 HAMILTON, ON – Alessandro Hojabrpour’s goal gave Pacific FC their first-ever North Star Shield. Pacific did not look sharp in the first half. However, they had a terrific second-half performance and their defence played spectacularly in a one-goal victory at Tim Hortons Field.

Full Game Summary:#ForTheIsle was the better team in the second half.#ForgeFC missed a lot of chances to score, especially in the first half.

It was a bit of a stalemate to begin the game. Both teams exchanged possessions to start the first four minutes of the game. Manny Aparicio’s shot was pulled off thanks to a mistake from Elimane Cissé. The first shot in the game was in the sixth minute. Pacific goalkeeper got the ball in the seventh minute. Omar Browne’s shot in the ninth minute was off-target. Thomas Meilleur-Giguère read the ball and made a good defensive play in the 14-minute. Kyle Bekker’s header was off-target in the 19-minute.

Dominic Samuel made a good defensive play in the 24-minute to prevent a clear scoring chance for Pacific FC. Lukas MacNaughton made a terrific defensive header to counter Garven Metusala’s header in the 27-minute. Forge had a great chance to score in the 28-minute, however, the Hamilton player was unable to control the ball. Emery Welshman got the pass in the 37-minute, but could not finish it. Kwame Awuah and Bekker were the ones that set up the play. However, the Forge player could not control the ball in the 44-minute. Pacific goalkeeper Callum Irving then saved a Bekker shot just before the first half ended.

Omar Browne’s shot was just off-target in the 47-minute. Gianni Dos Santos in the 49-minute had a chance to score but did not go into the back of the net. Jamar Dixon made a terrific defensive play in the 51-minute. Dos Santos won the ball and beat Cissé in the 58-minute. Forge had not generated many scoring chances in the last 10 minutes before that. Both of those points cost Hamilton in the 59-minute.

Dos Santos’ cross met Alessandro Hojabrpour’s head, which gave Pacific the game-winning goal. Josh Heard had a chance to extend it, but the shot hit the cross-bar.

Forge also had a few chances to score. Their best chance was when Emery Welshman got a clear header to the goal. It was a hard header to control, but if he hit the net, the game would have been tied. Lastly, Browne’s shot in the 84-minute was stopped by Pacific goalkeeper Irving. Browne ended up getting a second yellow card and a red card near the end of the game.

It is a great achievement for soccer in the province of British Columbia. This includes League1 British Columbia (a third-tier Canadian soccer league for both men and women) starting next year and possibly a Metro Vancouver CPL team in 2023. To further that growth, Pa Modou-Kah and his Langford-side won two Canadian Premier League playoff games on the road this year (including the win against Cavalry FC). As a result, they are for the very first time, North Star Shield champions. This is what goal scorer Hojabrpour said about the accomplishment in his interview with Kristian Jack on OneSoccer.

“What a feeling man, you do all this for this one game and, you know things went our way a little bit, but that’s the game, you need a little bit of luck, hard work, beautiful moment, I do not even know what to say.”

The North Star Shield has a new home

Pacific FC wins their first-ever North Star Shield. The underdog’s defence was the biggest reason why they won the North Star Shield. This was especially true in the first half when Hamilton had several chances to score. Also, in the second half, Pacific played better, especially after scoring the first goal. This was also the first win Pacific has ever gotten against Forge. Langford (Greater Victoria) will represent the Canadian Premier League in the 2022 Concacaf League.

Alessandro Hojabrpour’s goal gave Pacific FC the North Star Shield. Yes, the defence was the biggest factor, but Hojabrpour’s goal was the one that gave them the North Star Shield. This also played a major factor in Hojabrpour winning Pacific FC Fans’ Man of the Match. It all started when Cissé fouled Dos Santos. The foul given up by Forge’s Cisse led to the game-winning goal. Dos Santos delivered a great cross following a set-piece. Hojabrpour made terrific contact and put the ball into the back of the net.

Forge FC will feel it was an opportunity missed. The host side from Tim Hortons Field will feel hard-done in the first half. They were clearly the better team in the first 45 minutes. However, some clear-cut chances were missed by Hamilton. They still accomplished a lot this year though and will represent the Canadian Premier League in the 2022 Concacaf Champions League.

Picture credit to Carolina Rueda of the Canadian Premier League on December 5, 2021.