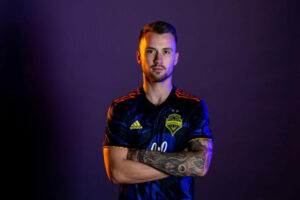 The anticipation — and the watch — is over on where Albert Rusnák will sign. After being linked to almost every club in Major League Soccer, and a few overseas, Rusnák ended the weeks-long speculation of where he will continue his career. On Thursday, it was officially announced that he would sign with the Seattle Sounders FC.

His contract is for two years, with a club option for 2024.

Rusnák signed a Designated Player contract with the Sounders. Other DPs on the Sounders roster include Raúl Ruidíaz and Nicolás Lodeiro. He will take the DP spot that has been freed up by João Paulo — Paulo still remains with the club, but has been signed to a contract using TAM.

“I am very pleased to add a player of Albert’s caliber to our roster,” Brian Schmetzer, Sounders manager, said. “For years, he has been one of the more difficult players we’ve had to face, so I’m more than happy we get to welcome him to our team as preseason camp begins.”

“We are very excited to welcome such a quality player like Albert to Seattle,” General Manager & President of Soccer Garth Lagerwey said. “At 27, he is in the prime of his career and already knows our league very well. We’re confident his addition puts our roster in a very good position to succeed in 2022.”

Rusnák was a thorn in the side of the Sounders last year, scoring in both regular-season meetings last year. Rusnák did miss out on the highly-contested playoff match between the two sides, but Real Salt Lake advanced over Seattle in the first round in 2021. Now, Rusnák reunites with former head coach Freddy Juarez, who is an assistant under Schmetzer.

Albert Rusnàk is going to look GOOD in Rave Green

Highlights of our latest signing!

Three Takeaways on Rusnák to Seattle

The post Albert Rusnák signs with the Seattle Sounders on a DP contract appeared first on Last Word On Soccer.