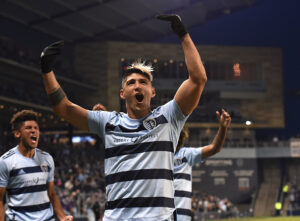 (Editorial) – Sporting Kansas City gave the San Jose Earthquakes their third straight home loss on Saturday, with a 3-1 win paced by a goal and assist performance from both Daniel Salloi and Alan Pulido.

The first time Sporting KC saw Matias Almeyda and the San Jose Earthquakes’ man-marking system, they got shellacked. I would know, I was there. A 4-1 win for the Quakes and a performance from Sporting KC that was indicative of what was to come from then in 2019. Since then, Sporting KC hasn’t lost to them and has increasingly looked like they have the Quakes figured out. It also helps to have that Alan Pulido guy.

The Earthquakes lone goal came on a training ground set-piece and was emphatically dispatched by Chofis Lopez who put a brilliant curling finish in the top corner. Less than five minutes in, the Earthquakes had a lead and looked like they were ready to step on the gas.

Jaylin Lindsey got Sporting KC back level and from then on it was Sporting KC who controlled the match. We’ll talk about domination versus control a little later. Alan Pulido and Salloi added goals in the second half, to round out a spectacular road performance from Sporting and catapulting them to second place in the West.

Normally, there are just a few things to discuss. Today there seems to be a lot more, so let’s do that, shall we? These will be brief for the sake of carpal tunnel.

8. The Earthquakes have a problem in the middle of the field

The simple fix would be the return of Judson to the midfield, but I still don’t know if it’s all that simple. The best three midfielders they have are Judson, Jackson Yuiell, and Eric Remedi. If you put all three of them on the field at once, you would be playing three defensive mids, and almost solely be relying on a front trio of Espinoza, Cowell, and Fierro to create. That is not good. Almeyda has to figure out the best way to get his midfield covered, but where it is right now, isn’t it. Sporting KC’s starting three midfielders won over 60% of their duels against San Jose. That will lead to defeat for the Earthquakes nearly every single time.

7. Gianluca Busio’s best position is as a six…at the moment

Busio loves to attack. He loves to score goals or assist them. But at the moment, he is most effective on a soccer field by controlling the game in the midfield. Since Busio returned to the six for Sporting KC, they’ve outscored their opponents 6-2 in three matches and picked up six points. That was in three games. For the third match in a row, Busio completed 90% of his passes from the midfield. He also made 13 recoveries and was not dispossessed of the ball. He’s 18 and he’s putting in top-level performances as their six. We’ve yet to see him as effective at the 10 as he is the six, so for now, I think that’s his best position.

6. Jaylin Lindsey may not give Graham Zusi his spot back

Jaylin Lindsey’s edge on Zusi is that he is a better 1v1 defender. Zusi might be more influential in the attack at times, but Lindsey popped up with his first professional goal on Saturday, taking the insane amount of space in front of him and skating in untouched to slot home past JT Marcinkowski. Jaylin has a good eye for when to get forward, how far forward to go, and when he needs to either take a touch to the end line or whip in the cross. The attacking part of his game is really starting to come around this season.

5. Alan Pulido is everything Sporting KC hoped he would be

The Alan Pulido assist was class for a guy they paid $9 million dollars for to score their goals. Honestly, Pulido could’ve had a hat-trick and two assists if a few bounces of the ball had gone his way. But really, look at this:

This is the moment Pulido made the pass for Lindsey to go through. (in the very middle with 3 guys closing in)

Prior to the 2020 season, a few of us who cover the team ran into a member of the coaching staff behind the scenes at their jersey launch and promo event. The question was posed about what we should expect from Pulido? The whole pandemic thing and a giant chunk of the season being cut out wasn’t even on anyone’s radars at the moment of this conversation. The coach told us he thought he could easily score 10 goals, but the question should be more about how many he creates for others. Pulido has picked up assists before, but this was maybe the first time we’ve seen the true playmaking ability from deeper that Pulido possesses, and that Sporting’s technical staff salivates over.

4. Who had a worse miss this week?

Let your voices be heard, and accept our apologies for naming Quioto as part of the Houston Dynamo. They rid themselves of those finishing woes a while back.

WONDO OF THE WEEK

Who had the worse miss in #MLS play this week? #Quakes74 #HoldItDown

3. Should we be asking who pairs alongside Ilie?

In the three games, Sporting KC has played with Ilie Sanchez on the backline they’ve only conceded two goals, and only one of them could you REALLY fault the backline. Sporting’s opponents have a 3.08 xG over those entire three games. Two of them were under one. With how well Busio is playing at the six, maybe we should not be asking so much who pairs with Fontas, but who pairs with Ilie? Ilie has been the lone constant over those three matches and Kaveh Rad has looked good on the field next to him, as did Fontás. We haven’t seen Isimat-Mirin since week 2, so I assume maybe he’d get a shot next to Ilie. But for now, Ilie looks immovable as a CB.

I had long had my reservations about how feasible it is to play the style Almeyda wants, and keep the same level of consistency every week. It’s hard enough to do when you do have the quality and expenditure for said quality in the squad to play that way. But when you’re financially middle or dead last in comparison to the rest of your league, you likely don’t have the depth to pull it off over the long haul. Here is Matias’ quote after the match (through a translator):

“I ask the players every day how they are feeling. I believe what they tell me. The first thing I ask is if they have any issues or are feeling tired. Our game is dynamic. There were a lot of spaces in today’s match so there were openings on both sides…The games become open, and there is a lot of space. When you are not with your mark, it is noticeable.”

Woof. That is a direct call-out to players who either weren’t honest about their fitness levels or straight up were not ready to deal with #SportingFit. If this early in the season they are struggling with fitness after a whole week off, Quakes fans should be worried about what that might mean down the stretch.

Any time you have to play the San Jose Earthquakes you have to match or surpass their work ethic. Very rarely can you fall short of the level they set and come away with three points. For the first fifteen minutes of the match, it seemed that Sporting KC were sleepwalking. That shifted pretty quickly Lindsey’s goal turned the tide in the match.

“I really think when we scored it changed the game,” Vermes said postgame. “I think that they changed. We didn’t panic when they scored. We just got right back to business right away. When we found our goal, it was almost like after that we took another step up.”

To beat a time like San Jose, you have to win your 1v1 battles. They did that as mentioned above with the duels, but Vermes also discussed the effect of movement and how you can put pressure on them when you win your battle. Vermes discussed this in his postgame responses as well.

“Like (Jaylin) Lindsey, he took the space in front of him. It was a good pass and a great first touch by him and a great finish, but if you don’t make that ran and you don’t have that movement off the ball then you don’t have that chance. The same with Daniel (Salloi), the way that once you turn you have to take space with the ball. You have to dribble because if you get past your guy, the other ones are a little bit reluctant to step up.”

Both Seattle, and Portland did this in a short week on their way to victory. San Jose had a week to try and fix it, and lost in the same exact fashion. Cascadia provided the “How to” Manual, and Peter Vermes read it, memorized it, put it into practice and came away with a big three points.

Sporting KC will host Houston Dynamo on 5/29 with an 8:30/5:30pm kickoff. The San Jose Earthquakes and LA Galaxy will face off Saturday with a 6/3pm kickoff.