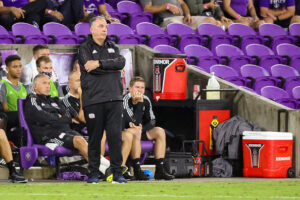 Orl, Florida– to close out this weekend of MLS action, the newly crowned Supporters’ Shield champions left it late in Orlando. Orlando City went into the final ten minutes with a two-goal lead at Exploria Field, but the Revs’ bench came to the fore once again. Adam Buksa struck twice to earn New England a point and continue their march onto a record-breaking season.

And your new Supporters’ Shield champions…

Goals from Remi Walter and Johnny Russell helped Peter Vermes’ SKC overcome Seattle at Lumen Field. Not only did this win have major implications for the Western Conference, but the Supporters’ Shield on the whole. Sporting’s road-win in Washington confirms the inevitable, that the Revs have clinched the Shield. This is the first time in the club’s history that they have prevailed in the regular season. Focusing on New England’s game though and when all seemed lost, Adam Buksa rescued a point in Orlando.

Gillette Stadium has been somewhat of a fortress for the Revs this term, yet they are even better away from home. Prior to their trip north of the border to face CF Montreal, it was confirmed that New England had captured a home playoff game. Since then, they have continued to thrive to the point where they have grasped an inaugural Supporters’ Shield.

This 2-2 draw with Orlando, whilst a great result on the surface brings to an end an imperious run on the road. Besides a loss in the Big Apple, The last time New England failed to win away from home was a trip to Lower.Com Field back in early July. Goalkeeper Eloy Room was huge for the Crew in the most recent meeting of this pair. Since then, they’ve put five past Inter Miami, edged out last year’s Supporters’ Shield winning Philly side and most recently, DC United.

The key strength to an elite side is the squad rotation. Bruce Arena has been tested to full capacity with numerous injuries, including a major one to DP Carles Gil. Now with the majority of his players fit though, Arena has continued to use his all roster so as to keep everyone sharp and in-tune. All three DPs (Gil, Adam Buksa and Gustavo Bou) began this trip to Orlando on the bench along with Tajon Buchanan, Henry Kessler and Brandon Bye amongst others.

Nani’s first-half header was the difference at the break and so Bruce sent on Gil and Buksa for the newly crowned Supporters’ Shield winning Revolution. Emu Boateng and Luis Caicedo made way for the pair and yet, it was Orlando who struck next. Nani has struggled from the penalty spot recently, especially against the Revs, so it was USMNT striker Daryl Dike who stepped up and converted.

It took a while for the Revs to get going but they got it done. It was a story all about substitutions. Gustavo Bou assisted Buksa for the first and then DeJuan Jones set up the Pole for an added time equalizer. This trio all began the game on the sidelines.

The result on the surface is a very good one given that Orlando is fellow MLS Cup and Supporters’ Shield hopefuls. New England has the record points tally in their sights and this point takes them even closer. Only two games remain in the regular season: this weekend they welcome the Rapids to Foxborough and then they close it out with Inter Miami coming to town. LAFC got 72 points back in 2019 and so a win in either game would see the record go the way of the Revs!