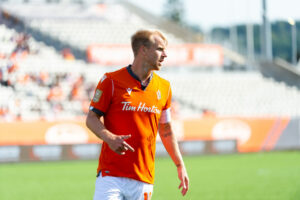 Guápiles, CR – AD Santos scored three straight goals and took advantage of Forge FC’s defensive mistakes and won the game 3-1. They were the better team at the end of the day, even though Hamilton did pressure Santos a lot in the second half. Their counter-attack was dangerous and set-pieces were exceptional against Hamilton. This is despite giving up an early goal to Forge FC’s Kyle Bekker.

6’ #ForgeFC scores! Great teamwork by Hamilton, which started with Jonathan Grant! Kyle Bekker scores the goal and Joshua Navarro was credited with the assist!#SANvFOR | 0-1 | #SCL21pic.twitter.com/EdaE1J2wRk

In the first minute, Forge FC was unable to take advantage of a mistake by Santos. Triston Henry made a good save in the third minute. Santos was attacking as they get a second corner in the fourth minute. However, the pass to Elimane Cissé was too far and was collected by the Santos goalkeeper. However, Hamilton would get their goal as it was a well-done team goal. Jonathan Grant started the play as he made a good pass to Joshua Navarro. Navarro then found Forge captain Bekker, who put the ball into the back of the net.

17’ Christopher Meneses scores for #DaleSantistas! His shot takes a deflection and goes into the back of the net!#SANvFOR | 2-1 | #SCL21pic.twitter.com/yOQMrtgaii

Good defence by Forge FC to steal the ball in the eighth minute to prevent an immediate response from Santos. However, Santos would respond with two goals of their own. The first one was from a free-kick where no Hamilton player marked Javon East, who scored the first goal for Guápiles in the 12-minute. Then, in the 17-minute, a poor clearance from Samuel Grant lead to another Santos goal.

A good block by Hamilton’s Daniel Krutzen in the 23-minute. Good defence by Santos in the 31-minute. Henry made a good save in the 35-minute. Browne missed the net in the 36-minute. Grant received a yellow card on a smart play as he tackled a Santos player before getting a clear-cut opportunity and Henry made a terrific save in the 43-minute.

Forge FC’s Kwame Awuah almost scored on a bad angle in the 51-minute. Santos started the game on a positive note. It started with a great team play leading to a Bryan López goal. A Guápiles player made a terrific tackle in the 60-minute to prevent a clear-cut Hamilton scoring chance. Omar Browne almost responded. Cisse’s shot hit the post in the 66-minute.

Emery Welshman’s shot was easily stopped in the 69-minute. Santos almost replied in a counter-attack in the 70-minute. Grant for Hamilton made an important play to prevent Santos from scoring a fourth but Hamilton’s defence looked very flimsy. Welshman’s shot was off-target. Samuel could not make contact with the ball. In the 80-minute, a penalty shout did not result in a penalty shot for Hamilton. AD Santos made a good defensive play in the 90+3-minute of play to close the game and got all three points.

A tough start to the Quarter-Final in Costa Rica. We’ll take our away goal and look ahead to the second leg at @TimHortonsField on November 2!#Santos 3-1 #ForgeFC | #SCL21 pic.twitter.com/ahvnMW2Qtx

AD Santos took advantage of Hamilton’s mistakes. After conceding the first goal of the game, Santos scored three straight goals. The first goal was scored off a set-piece. No one marked Javon East, who tied the game for his Costa Rican side. Then of a poor Forge clearance, Christopher Meneses scored a goal via a deflection in the 17-minute. Then in the 52-minute, Bryan Steven Lopez Martinez was found wide open for the third goal for the home side.

AD Santos played well defensively. Santos did a good job in defending. They made it hard for Hamilton to break their defences. As a result, Forge had less clear-cut chances than Santos. An example would be a Guápiles player, who made a terrific tackle in the 60-minute to prevent a clear-cut Hamilton scoring chance.

Forge FC needs to win at Tim Hortons Field. Hamilton will need to win and have a favourable aggregate score to advance to the Concacaf League semi-finals stage on November 2 at 8:00 p.m. ET. This is also most likely true for making the Concacaf Champions League. However, that also depends on the other potential quarter-finalists. Two of the three losing quarter-finalists along with the four Concacaf League semi-finalists make the 2022 Concacaf Champions League. The good thing is that they generally perform well at Tim Hortons Field. However, they will need to avoid a draw as they did against C.A. Independiente de La Chorrera.

Photo credit to Ryan McCullough of the Canadian Premier League on Saturday, September. 11 2021.