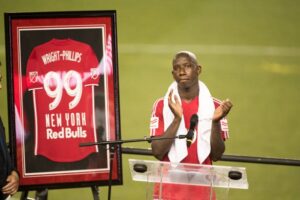 EDITORIAL – The legend of Bradley Wright-Phillips in MLS nearly didn’t happen. Once a young prodigy at Manchester City, he endured stops at Southampton, Plymouth Argyle, Charlton Athletic and Brentford. The Englishman was at a career crossroad.

It’s the summer of 2013, and BWP is on trial with the New York Red Bulls. If he fails to make the cut, who knows. It would likely be a return to England possibly trying out for another lower-league club. But then Sporting Director Andy Roxburg saw something in the 28-year-old and signed him. You know the saying, from there, the rest was history.

MLS Comeback Player of the Year (’20)

Congrats on an incredible career, @BWPNINENINE.

And how, with his goals, hat-tricks, heel-clicks and more. Bradley Wright-Phillips took his chance and ran with it to heights rarely seen in recent memory. From trialist to superstar, quiet-mannered to fancy Golden Boot winner. At 36, BWP has called it a career and it’s about time we celebrate one of the more unlikely success stories in Major League Soccer history.

Hitting the ground running (and heel-clicking)

Tactically, you couldn’t ask for a better fit than Wright-Phillips in Mike Petke’s 4-4-2. BWP camped inside the 18-yard box awaiting service from full-backs Roy Miller, Brandon Barklage and Jonny Steele. It was a recipe for success. He’d score his first goal and hat-trick against the Houston Dynamo in the 2013 season as he got his feet wet in a new league.

Wright-Phillips was often combining with the likes of Fabian Espindola and Peguy Luyindula in a side littered with goals, while opponents had to try and score past another then-unknown in Luis Robles. Add to that the wizardry of Lloyd Sam, steel toughness of Dax McCarty, Tim Cahill and of course the classy mastery of Thierry Henry and you have the makings of a Supporters Shield contender. And true to form, the Red Bulls secured their first ever title, winning the league at home against the Chicago Fire.

It would be start of the franchise’s most successful era, with BWP at the heart of it.

Following the historic 2013 season, Wright-Phillips was now one of the first names on the team sheet. Opponents were preparing to stop him, let alone try to contain him. And so Bradley Wright-Phillips became the ultimate goals scoring machine, winning his first Golden Boot bagging a then-record 27 regular season goals. The short but fun rivalry with Sporting KC came to a head when BWP tied the scoring record at KC and then eliminating them at Red Bull Arena with a late brace in the Knockout Round.

This will forever be accurate re BWP’s time with the @newyorkredbulls. #RBNY pic.twitter.com/a6Zeq9uuOq

As MLS Cup glory eluded them, stars such as Henry and Cahill departed. It made Wright-Phillips the main focal point in attack, with new coach Jesse Marsch at the helm. Another Supporters Shield trophy followed as they clinched it in Chicago, and another Golden Boot came in 2016. BWP was now firmly was one of the league’s biggest stars, and its most deadliest striker. He had shown the clutch gene with goals to eliminate KC in 2014 and D.C. United in 2015. But it was the comeback in the 2017 U.S Open Cup at FC Cincinnati that ranks up there.

Down 2-0 with 12 minutes to go, BWP scored two headed goals in the 78th and 101st minute in extra time to secure a spot in the final. It was one of his finest performances, dragging that team to victory. But at this stage, he was in his early 30s and knowing that the fun times wouldn’t last forever.

Breaking records and retiring the #99

The year is 2018 and history will be achieved on multiple fronts. Bradley Wright-Phillips was 33 at the time, and the squad had the perfect mix of youth starlets and hungry veterans. BWP also became the first player in MLS history to score at least 20 goals in three different seasons. It led to a third Supporters Shield in six years, a team that broke the points record, wins record, home wins tally and won most home points  in a year. One of the league’s greatest teams, it also had some memorable moments to savor with BWP at center stage.

Due to his incredible scoring rate, Wright-Phillips was nearing 100 club goals. There would be a goal tracker above the billboards that would be manually changed anytime BWP scored. While it was upsetting that it didn’t happen at home, reaching the century mark against arch rivals D.C. United at Audi Field is the next best thing. And once the feat was reached, came BWP’s most iconic celebration – taking off the shirt to show off his undershirt with 100 on the back. He is still the fastest in league history to score 100 league goals.

But the honors wouldn’t stop there. It is many a professional athletes’ dream to have their number retired. For Bradley Wright-Philips, he had the distinct honor of having the number 99 immortalized while still playing. The ceremony on August 5, 2018 was a beautiful scene, with his wife and kids on hand, including video tributes from players and coaches past and present. If there’s one thing admirable about BWP, it’s that he remained humble throughout, often the quiet and silent leader showering his teammates with all the praise.

BWP would leave the club after 2019 season, its all-time leading goal scorer (126) and second in team history in appearances. Trips to Columbus Crew and LAFC soon happened, winning the 2020 MLS Comeback Player of the Year, but a Red Bull is what he’ll always be known for.

There will forever be only one ‘Two Nines’

Bradley Wright-Phillips’ MLS career is an anomaly in sports. Very rarely does someone find an opportunity starting out on trial just to make the team, end up achieving all-time great status. He is arguably the most important player in the history of the club. If you were to name the all-time best Red Bulls XI, BWP is in there starting up top alone in a 4-2-3-1. At his peak he was unstoppable, a poacher and deadly finisher with both feet. The complete striker who could torment any defense. Let’s not forget he scored 12 times against NYCFC, and 11 against D.C. United. The big man for the big occasion.

And if there’s anyone at a fork in the road, just look at how BWP did it. There are open doors for you, so take the chance and make the absolute best of it. Because once you do, you’ll achieve success possibly beyond your wildest imagination.

He is and forever will be admired by fans, teammates and peers. One day, there will be a statue done in his honor too because it’s only fitting. Reportedly, Wright-Phillips is back with the Red Bulls organization. He’ll be welcomed with open arms, the greatest Red Bull of them all, Bradley Wright-Phillips. 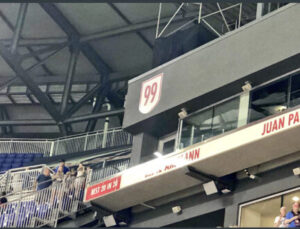 The post A tribute to the greatest New York Red Bull – Bradley Wright-Phillips appeared first on Last Word On Soccer.