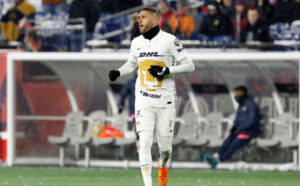 After an emphatic victory in the first leg, who could have seen this coming for the New England Revolution? Winning by three goals to nil when a Mexican team comes to town is always something to be proud of, yet the Revolution were unable to get the job done. Pumas scored three unanswered goals on home soil and then extinguished New England’s CCL dreams via a tense penalty shootout.

Penalty shootout heartache for the Revolution

What went wrong south of the border?

The emotion on everyone’s faces after the game was evident. It was a gut-wrenching way to exit the tournament, especially given the 3-0 win at Gillette Stadium last week. Of course, the Revolution conceded three unanswered goals, and lost via a penalty shootout, but it wasn’t as if they failed to create anything. The likes of Adam Buksa and Gustavo Bou had chances in the first half and this continued throughout the match.

Bruce Arena pointed out after the game that, “even as well as Pumas played, we had a chance right at the end of the game to score and didn’t.”

Earl Edwards Jr. has been the stand-in in between the sticks for the absent Matt Turner thus far this season and on the whole, once again he impressed. He certainly should have done better for the third goal — this goes without saying. However, he made some great stops, particularly in the first 45 and the game could easily have been done after 90, instead of reaching the penalty shootout, if it weren’t for Edwards.

Defense is the best form of attack as a footballing slogan was directly opposed by this Revolution-Pumas game with a backline not used to playing together showing definite teething issues.

“They were under a lot of pressure during the game. We made a lot of mistakes that caused goals but that’s the way it goes, there are no excuses. We certainly could have been a little bit better, the third goal is an example,” Arena said of the defensive performance. They were often out of shape and at sixes-and-sevens, which allowed a goal-hungry Pumas side to capitalize.

From that horrible defeat at the hands of Real Salt Lake, to this penalty shootout loss, what is going wrong the Revolution? Coach Arena said prior to kick off that, “the Salt Lake game is over with, and we move forward,” but this was yet another poor result. That being said, there were certain mitigating factors as opposed to a deep-rooted issue that is just now bubbling up to the surface.

The best place to start with this is tactical naivety and mismanagement. When asked if he felt he set-up in the correct manner down in Mexico City, Arena gave a simple answer of yes. It would seem that this is just to save face though as it clearly proved to not be correct whatsoever. There were key players missing, but it was evident from very early on that the tactical layout was all wrong. Defending and inviting on pressure caught up to the makeshift backline.

It would be easy enough for the altitude and the cancellation of the previous rounds matches versus Cavalry to be used as an explainer, but the bottom line is that the Revolution players simply weren’t good enough. Only a couple of players can keep their heads held high off the back of this performance. Even the takers in the penalty shootout seemed odd.

“We generally know who our best penalty kickers are, our first three guys were the guys that we knew would be confident taking them so they went… Sebastian and Jozy said they’d take the one,” Arena said.

While this seems like a perfectly fair way of operating, for a DP No. 9 who is leading the team in goals in Adam Buksa not to take one at such a pivotal moment certainly raises a few eyebrows.

Where now for the Revs after this penalty shootout defeat?

This CCL exit means that there is one less trophy for the Revolution to compete for, but that isn’t all doom and gloom. They of course set a record regular season points tally last time out and a penalty shootout mishap isn’t going to take away from that. New England can now either throw themselves into a Shield defense or try and add an MLS Cup to their arsenal later on in the year.

Dinenno with two goals and the winning penalty to send Pumas past New England Revolution to the #SCCL22 Semifinals: pic.twitter.com/sTXgWXbKU6

The Revs have MLS new boys Charlotte FC lying in wait for them. A side who will be determined to further compound the Boston misery, getting their first point(s) in the league in the process. Beyond that, there is an international break which may well do this group good given the mental torment they have experienced with a last gasp loss to RSL and now this penalty shootout heartbreak.

Someone always has to lose in a penalty shootout and this time around, as is often the case in CCL, it was the MLS team, with the Liga MX cohort prevailing. This has been a very difficult week or so for everyone involved with the club.

The post A penalty shootout separates New England and Pumas in Mexico City appeared first on Last Word On Soccer.