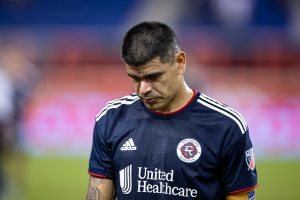 No matter how one dresses this season up, it has been a failure. There was clear evidence of this in the last outing as the Revolution lost to a Houston Dynamo who were already out of the playoff picture. It really was a damning indictment of this poor New England team.

The biggest headline regarding this New England team was the return of Carles Gil to the side. The Spaniard wasn’t involved in the defeat to the New York Red Bulls following the birth of his child and his absence was strongly felt. Talking of Gil and he wasn’t exactly positive in the wake of another Revs’ defeat.

“I think maybe we don’t deserve to be in the playoffs because I think we’re not a competitive team now” were the words of Gil after this loss. Comparatively to 2021, the Revs have been a drastic contrast. Times are tough and in spite of some strong results, it hasn’t gone well.

Houston came into this one with very little to play for having already been eliminated from playoff contention. The Dynamo XI that drew 0-0 with Sporting Kansas City was changed slightly. Zarek Valentin and Ethan Bartlow dropped out of the backline whilst the suspended Matias Vera was replaced by Darwin Ceren. Griffin Dorsey and Tim Parker entered the fray at the back.

Meanwhile, the New England team saw a couple of changes over their own. As previously mentioned, Gil came back into action, as did Wilfrid Kaptoum. Jon Bell and Noel Buck dropped out with Bruce Arena choosing to revert to a four-at-the-back system.

This New England Team Come Up Short Once Again

“We played poorly. There’s no excuses. You can come up with a million of them, but we were outplayed on the evening. We looked like a tired team, but also a team that didn’t play together… We deserved to lose the game, and I’ve got to accept the responsibility for the performance of that team. It wasn’t good.” These are the words of Bruce Arena following an awful display for the Revolution.

Gil equalized from the penalty spot after Darwin Quintero netted the opener at BBVA Stadium. Fafa Picault, the man with plenty of MLS experience, then scored a brace in the final 15 minutes to secure three points for the Dynamo.

“I think we were outplayed in every phase of the game for the entire evening. I thought we were really very fortunate to still be in that game 70 minutes in” is another fiery line from Arena. It was another poor performance from this New England team and they paid the price, even to their head coach’s admissions.

Gil said the following, “I don’t know if we win the [final] three games if it’s possible. We lost many, many games.” At the same time, Arena echoed a similar sentiment. “I don’t know what the probability of us qualifying for the playoffs would be. I don’t think it’s great. We certainly have got to try to win our last three games.” It is difficult to look upon the Revs without a negative perspective.

This New England team had a lot of defensive frailties and it showed on the field. Upcoming fixtures against CF Montreal, Atlanta United and Chicago leave a lot to be desired. There are several other sides in playoff contention who boast a stronger footing and so Arena and co have it all to do in the final trio of MLS fixtures.

The post A Damning Indictment of This Poor New England Team appeared first on Last Word On Soccer.