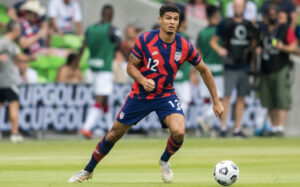 The U.S. men’s national team is flying high with consecutive trophies under its belt ahead of the start of Concacaf World Cup Qualifying. Now Gregg Berhalter has plenty of decisions to make in regards to his roster with several players likely unavailable through injury.

Plenty of the European-based stars led the way in the inaugural Concacaf Nations League Finals earlier this summer, featuring Christian Pulisic, Weston McKennie and John Brooks. Other players like Sergino Dest and Jordan Pefok also were included in the roster that defeated Honduras and Mexico in the final two matches of the tournament.

Berhalter will have to make plenty of tough decisions with players like Gyasi Zardes, Yunus Musah, Tim Ream and others either nursing injuries or recovering from recent injuries in hope to be back in time. Christian Pulisic’s status is also undetermined after the Chelsea winger recently tested positive for COVID-19.

Here’s a closer look at my projected squad for September’s WCQ matches.

If Gregg Berhalter chose his No. 1 option based off of playing time, Matt Turner would be the starter, but Zack Steffen’s role with Manchester City will likely see him start in qualifying for now. Steffen was mainly used in cup competitions and occasional EPL matches in 2020-21, winning the League Cup Final against Tottenham. He did start in Man City’s 1-0 Community Shield loss to Leicester City, but since has watched Ederson return as the No. 1 option.

Turner’s heroics at the Gold Cup surely has boosted his stock for the No. 1 job, conceding only once in 570 minutes of play. Ethan Horvath made the move to EFL Championship side Nottingham Forest and has only appeared in one Carabao Cup match so far.

However, Horvath for now will watch from the sidelines.

Gregg Berhalter Podcast, Episode 3 is OUT!

The #USMNT head coach discusses how he utilized substitutes to change each match throughout the @GoldCup.

More from Gregg on the team’s second

& WCQ prep by downloading in The U.S. Soccer Podcast feed wherever you get your pods!

John Brooks without question is the USMNT’s top center back option, but his partner could change throughout qualifying based on form. Miles Robinson excelled at the Gold Cup and might be in the mix to supplement Brooks in the backline.

Mark McKenzie continues to adjust to an in-and-out role starting role with Belgian side Genk and is still is deserving of a spot in the squad. His passing ability and one-on-one awareness is continuing to improve in Europe. Tim Ream’s veteran experience is still a must-have for the USMNT, especially in the competitive atmosphere of Concacaf.

Sergino Dest can play either LB or RB, but I believe that Dest is better suited on the right side to bomb upfield. Antonee Robinson and Reggie Cannon can fight for the left back role, although the edge might go to Robinson, who is starting regularly and excelling in the early stages of the new EFL Championship season with Fulham.

DeAndre Yedlin’s time at Galatasaray has been up-and-down, but the veteran full back can still be used in some shape with the national team.

Weston McKennie and Tyler Adams will own two of the spots in midfield with ease after establishing themselves at their European clubs. Adams’ fitness issues of the past hopefully will not come back to haunt the RB Leipzig man as he has kicked off his domestic season in Germany.

Kellyn Acosta is my choice to partner McKennie and Adams in midfielder after boosting his stock at the Gold Cup. The 26-year-old improved as the tournament went on and overall brings a necessary grit to midfield needed for Concacaf matches.

Sebastian Lletget is also an option to partner McKennie and Adams after excelling at his growing role with the LA Galaxy. Lletget brings veteran experience to the midfield and continues to be one of Berhalter’s go-to guys in international play.

Cristian Roldan is another familiar face who should be on this roster while Julian Green’s development as an all-around midfielder has made his stock grow vastly. Green might not be a starter, but I think he brings a necessary amount of grit to the table for these types of matches.

Gianluca Busio showed some positive moments at the Gold Cup and is my pick to be one of the final names on the roster.

We are in communication with the Chelsea medical staff and will work together to determine Christian’s status for the World Cup Qualifiers in September.

Christian Pulisic and Gio Reyna will likely continue their partnership at the wing positions in the USMNT September squad, but Berhalter might have to make do without Pulisic for the opening match on Sept. 2. The Chelsea man continues to be in a race for involvement against El Salvador, but should be fully back for the Canada and Honduras showdowns.

Reyna heads into a major season with Borussia Dortmund following the departure of Jadon Sancho to Manchester United. The new Dortmund No. 7 showed positive glimpses in his first few appearances with the USMNT and has already appeared under Marco Rose in the new Bundesliga campaign.

Matthew Hoppe can provide a spark off the bench for the USMNT after delivering some gutsy outings at the Gold Cup. The Schalke man could be on the move in the coming days with many of Europe’s top teams continuing to target him for a transfer.

Konrad De la Fuente has quickly impressed following his move to Marseille, and his versatility on the wing would be a good option to have off the bench.

Josh Sargent and Jordan Pefok headline the European-based strikers and both bring something different to the table. Sargent started the season in good form with Werder Bremen, but now is fighting for minutes at Norwich City. Pefok has helped Young Boys throughout UCL qualifying in Switzerland and will be the most physical striking option due to injuries to Daryl Dike and Gyasi Zardes.

Zardes is in a race to get back to full fitness while Dike will also likely miss out. The absence of both players surely will hamper Berhalter’s options in his attack.

The post A closer look at who should make the USMNT September qualifying roster appeared first on Last Word On Soccer.