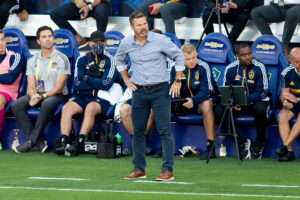 The Los Angeles Galaxy started 2021 brightly, winning eight of their first 12 games under new Los Angeles Galaxy Head Coach Greg Vanney. Designated Player Javier “Chicharito” Hernandez immediately got to work trying to redeem his 2020 form by scoring regularly and had the Galaxy challenging for first in the Western Conference early in the campaign. However, the 30 seconds of Real Salt Lake’s late win defined Galaxy’s season and is one reason why they did not make the playoffs.

An injury to the Galaxy striker kept him out for 12 games and as a result, the Galaxy offense faltered and failed to score goals during his absence. This exposed the Galaxy’s Achilles heel; the defense. Worse still, a combination of international commitments, injuries, and suspensions did not allow Vanney to establish a best 11, and the team suffered.

An agonizing two-month, nine-game winless streak at the season’s most critical point doomed the Galaxy’s year. Although they entered the final matchday at home having won just 5 of their last 22 games, they still held their fate in their hands. A win against Minnesota United would see them enter the playoffs, but the Galaxy fell behind early and ultimately tied 3-3. Real Salt Lake’s last-minute victory over Sporting Kansas City ensured that Los Angeles would miss their stated team goal of making the playoffs in a pivotal 30 seconds that define the Galaxy’s season. It also meant the Galaxy would miss the playoffs in four of their last five years.

WHAT A FINISH!@CH14_ gets his 16th goal of the season to pull us EVEN! pic.twitter.com/uW4ST8Wgj6

Chicharito tried dragging the Galaxy into the playoffs, however, scoring two of his 17 goals on the year in the season finale against Minnesota. The Mexican striker had three assists to go with his 17 goals and finished third in the golden boot race despite missing 12 games through injury. He scored seven goals in the first five games of the season and he registered 10 goals in the 10 games he played at home. He claimed the 2021 LA Galaxy Player of the Year award easily and Los Angeles felt his absence immensely when he went missing through injury with no one stepping up to replace his leadership and goals.

At the beginning of the season, Vanney spoke frequently of getting Chicharito back to his best, and it could be argued that he did. Mexico’s all-time leading goal scorer would have run away with the Golden Boot this year if not for his lengthy injury and ended up third in the goal race. Vanney also deserves praise for continuing to develop Galaxy right-back Julian Araujo, encouraging the 20-years-old to join in the attack more to complement his defensively sound game. In heeding Vanney’s advice, Araujo claimed six assists.

It’s a shame Araujo won’t be with the Galaxy much longer, the call of a big European club is imminent because Vanney has started to lay the foundation for success. He brought in six players under the age of 25 to get the Galaxy younger and try to identify an identity and “culture” for the wayward club. The players spoke frequently of the feeling of family in the dressing room and of their trust in Vanney and his staff, fellow Since 96’ers Kevin Hartman and Dan Calichman. The players also spoke of knowing Vanney’s game plan and philosophy.

While Guillermo Barros Schelotto’s Galaxy reign offered a lot of crossing and not much else, Vanney was successful in implementing his system if not getting it to actually work. Even when results did not go their way, the players seemed to know their role and what they were trying to accomplish.

But building a “culture” takes time, and seeing the fruits of those labors takes even longer.

Vanney attempted to remake a roster that failed to make the playoffs in 2020 by bringing in 12 new senior first-team players. Kevin Cabral signed as the club’s new designated player, and with a modest but not terrible return of five goals and five assists, it’s fair to say he’s still getting acclimated to Major League Soccer. The 22-year-old struggled to shoulder the offensive load in Chicharito’s absence, a fact which Galaxy fans were plenty vocal about. To be fair though, no one stepped up, with only two other Galaxy players scoring five goals. That defensive midfielder Rayan Raveloson was one of them speaks volumes about the Galaxy’s attack.

And although the defense improved from last year, it’s nothing to brag about either.

Repeatedly, the Galaxy was forced to come from behind in games, a position they could only rescue three points from once. The Galaxy backline was fifth worse in goals against and shots faced in the league despite the club signing new Centerbacks Derrick Williams and Sega Coulibaly. Both saw extended time on the bench through suspension or injury and failed to establish a partnership. The left-back position continues to be a problem as well. Jorge Villafaña was reliable until he went down injured, and while Niko Hämäläinen mostly made the spot his in Villafaña’s absence, Vanney dropped him for Oniel Fisher for the final two games of the season; an experiment with limited results.

The bright spot for the defense is the Galaxy have found their goalkeeper for the foreseeable future in Jonathan Bond. The Galaxy shot-stopper single-handedly kept Los Angeles in more than one match and showed MLS-best-form occasionally. As mentioned above, Julian Araujo continued to impress. He is not long for the Galaxy though, and Vanney will have even more defensive work to do soon in trying to replace him at right-back.

A taste of things to come

Araujo’s expected departure, along with the expiring contracts of Designated Player Jona Dos Santos and Sacha Kljestan will see even more turnover in the Galaxy roster this off-season. Vanney will also have a decision to make on Fisher, defender Danilo Acosta, and midfielder Víctor Vázquez, who all hold club options. While a performance-based clause in Daniel Steres’ contract automatically triggered a club option for an additional year, making that the first roster move of the off-season.

Vanney will once again have the opportunity to make this team further in his image. The announcement on Tuesday morning that L.A. Galaxy General Manager Dennis Te Kloese is close to finalizing a deal that would see him take over soccer operations at Feyenoord clears the path for Vanney.

It’s entirely possible Galaxy fans will have to get used to seeing between eight to 12 fresh faces next season. Vanney’s biggest tasks include bringing in a new DP, finally fixing the defense, and finding a reliable source of goals should Chicharito need a rest or get sidelined. The goals should come if he can get the best out of Kevin Cabral and further develop Samuel Grandsir on the wings.

Vanney will have just 96 days before the Galaxy’s season opener against NYCFC on Sunday, February 27th to fix these problems.

Progress, but not quite there – 30 seconds define Galaxy’s season

Both the players and coaching staff expressed they felt the club wasn’t that far away from where they wanted to be and that only a series of misfortunes in various games prevented it from getting points from very winnable games. And unfortunately, all the bad luck finally caught up to the Galaxy in the last match of the season when it counted most which mean the most postseason action it gets is a collaboration with Adidas on Galaxy-inspired Gazelles.

The problem is the Galaxy shouldn’t be the type of club that relies on the last match to get into the playoffs and on the finest of margins like 30 seconds to define an entire season.