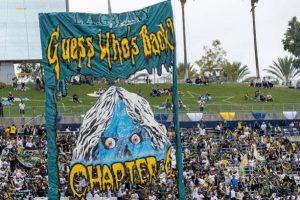 CARSON, Calif. – The 2023 MLS SuperDraft was completed on Wednesday night. The Los Angeles Galaxy started the day with four draft picks: 23rd overall, 23rd in the second round, and the 19th and 23rd picks in the third and final round. Let’s review how the draft went for the LA Galaxy.

Admittedly, most of the action took place prior to the Galaxy’s first pick and without their involvement. This SuperDraft included eleven Generation Adidas. As typical with these drafts, the talent was top heavy. With LA picking 23rd and not trading up, the best talent was gone before the Galaxy picked in the first round.

With the 23rd overall pick, the Galaxy selected UCF midfielder Gino Vivi. The 22-year-old recorded 19 goals and 23 assists across four years with the Golden Knights in 61 appearances. In 2021 as a sophomore, he was named First-Team All-Conference and was twice selected American Athletic Conference Second-Team All-Conference. Vivi is originally from San José, Costa Rica and has featured for Los Ticos at the U-20 level.

Vivi put up numbers for a non-forward in four years of college. The fact that he got a look at the national team level is another good sign. Hopefully Gregg Vanney sees something in him that can work at the MLS level. Depth at midfield could be valuable this season. We’ll see if Vivi can provide that.

It’s been awhile since the Galaxy got value out of the draft. The last draft pick who was around the first team in their rookie year was Emil Cuello (19th overall, 2019 SuperDraft) who stuck around for two seasons. He’s since been in the USL Championship and was just released by Sacramento Republic. One could make the argument that the Galaxy haven’t had a draft pick establish themselves in MLS since Hector Jiménez (34th overall, 2011 SuperDraft). That needs to change.

In the second round, the club selected Syracuse goalkeeper Russell Shealy. The 23-year-old played in 43 games across three seasons for the Orange after two years at the University of Maryland. He did spend some time in the Atlanta United academy. The Galaxy did just re-sign both Jonathan Bond and Klinsmann. Shealy could have a low bar to make the team as a third choice goalkeeper and would be in a good position to learn from the veterans in front of him.

The Galaxy passed on both third round picks, the higher being 77th overall. It’s likely they saw no viable players by that point in the draft. This is becoming more prevalent.