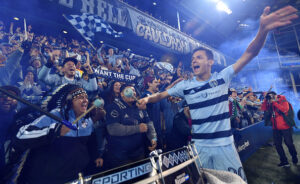 PREVIEW – Sporting Kansas City’s 2021 season had a little bit of everything. Daniel Salloi made a run at the MLS MVP award. Johnny Russell became the MLS leading scorer among Scottish players. PRO issued a statement saying they missed a penalty call on the last day of the season, costing Sporting KC second place (and the LA Galaxy the playoffs entirely). They even had to forfeit a game for their USL Championship club for using an ineligible player (he’d been suspended). Can Sporting KC hope for a little more normalcy in 2022? Let’s preview the 2022 season with three big questions.

Can Sporting KC maintain their offensive level of production without Alan Pulido?

That’s the $64,000 question, isn’t it? Pulido had potentially season-ending knee surgery in January. His eight goals and two assists ranked him third and sixth in the club, respectively. That’s a lot of production to try to replace, but as Peter Vermes acknowledges, you can’t clone the player. Anyone you bring in will bring something different to the table.

Vermes has attempted to fortify the attack by adding Cypriot winger Marinos Tzionis and Montenegrin forward Nikola Vujnovic. The 20-year-old Tzionis has earned 13 caps for the Cyprus national team and played in qualifying rounds for the UEFA Champions League. Vujnovic expects to join the club soon, after dealing with immigration issues.

Something else that will help is the revamping of the left-back position after the exit of last year’s starter, Luis Martins. Ndenbe and Sweat have been added to the roster in recent weeks and as forward (and 2021 MLS MVP candidate) Salloi said Wednesday, he is forming a similar partnership on the left side with Ndenbe and Sweat to the one Johnny Russell and Graham Zusi have on the right side. That should put a little fear into the rest of the Western Conference.

Will Sporting KC’s defense be able to clamp down on the counterattack better this season?

One would hope so. Vermes brought back defensive midfielder Oriol Rosell and added central defenders Robert Voloder and Kortne Ford, as well as left-backs Ndenbe and Sweat. Voloder, Ford, Sweat, and Ndenbe provide some much-needed youth for the backline.

According to Vermes, Ndenbe and Sweat make up the best tandem at left-back he’s had since he joined the club. Ndenbe, #5 on MLSsoccer.com’s list of under-the-radar signings of the 2022 offseason, comes from EA Guingamp of France’s Ligue 2. He’s described as having serious wheels and can escape pressure very well. Sweat is recovering from ACL surgery, so I’m sure Ndenbe will be getting most of the work early on.

German youth international Robert Voloder joins the Sporting KC backline from NK Maribor in the Slovenian first division, having played every minute of every match for the club since the season began in July. Ford spent the first five years of his professional career with the Colorado Rapids, joining them as a Homegrown Player in 2017. After missing the entire 2019 and 2020 seasons due to injury, he made his return to the field on loan with San Antonio FC, helping them reach the USL Western Conference Final.

Can Daniel Salloi maintain his performance level from 2021?

All indications point to “Yes.” Vermes says Salloi’s focus and attention to detail have been better than it was after his first “breakthrough” campaign in 2018. He struggled in 2019 and 2020, getting only one goal and one assist in those two seasons combined.

Salloi arrived at the club when he was 18 (he turns 26 in July). He said Wednesday that last year felt like the first year he’d played as an adult. He said 2018 felt like he was still a kid. Another factor that may provide Salloi with an incentive is that he is out of contract at the end of the season. He will want to either earn a new contract with Sporting KC or potentially a club in Europe.

The Last Word Sporting KC season preview: Can they end their trophy drought?

Sporting KC’s last trophy was the 2017 Lamar Hunt U.S. Open Cup, making this tied for the longest drought in club history. If everything comes together, this team could be very good. If they can’t seem to clamp down on the counterattack and hold leads late, they could struggle. With Vermes’ forceful personality and the way he stresses team over individual, getting players to buy into his vision of the way the team should play, I’d be more likely to bet on the former rather than the latter. Sporting will finish high enough to get a home playoff game. Whether they get the first-round bye or not, will come down to their defense. As 2021 proved for Sporting KC, anything can happen, especially in the playoffs.