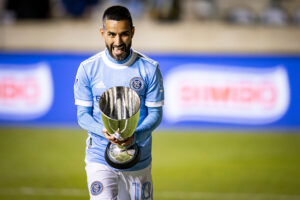 Preview – Under head coach Ronny Deila and behind a Golden Boot campaign from Valentín “Taty” Castellanos, NYCFC brought home the MLS Cup trophy in 2021. Now heading into 2022 they will look to continue building on the previous seasons’ success despite a few key departures. For NYCFC, these departures come with some important re-signings and new additions, including the chance to keep Castellanos around for a little while longer. Let’s take a look at how New York City shapes up with a 2022 NYCFC season preview as the start of MLS gets closer.

This offseason, NYCFC sent away a few young players, giving them opportunities in Europe but were able to resign some key pieces and bring in some defensive help. Despite having reportedly received several offers from clubs including River Plate and Palmeiras, NYCFC has held off suitors for Castellanos. Deila looks prepared to take on the 2022 season with Taty as his frontman yet again, but whether Castellanos will stay should be the storyline for NYCFC as the season quickly approaches.

The defense has been a weak point for NYCFC at times but with the signing of Thiago Martins, the front offense has made defense the point of emphasis this offseason. The 26-year-old Center-Back joins as a Designated Player after spending time between the Brazilian and Japanese leagues. This is while NYCFC awaits the return of Anton Tinnerholm, the backline appears solid heading into the season.

Young players, however, will need to step up this season especially with several moving to Europe there will be key positions that need filling. With the signing of four homegrown players within the last 12-months, let’s see how some of these younger players perform and what they can bring to the first team. All of which will be vital to any current and future success NYCFC finds.

Lastly, if Castellanos does transfer to another club at some point, who will step up to fill his role? The resigning of Maxi Moralez on a lowered contract was nice to see, but at 34, he shouldn’t be expected to take on the goal-scoring. The Brazilian attacking contingent in Héber, Thiago Andrade, and Talles Magno will need to produce in front of goal especially once Taty inevitably goes.

Who will step up for the key departures?

After both played great seasons and helped NYCFC to the MLS Cup, James Sands and Jesús Medina both received opportunities abroad. They play such crucial roles in Delia’s system as a midfield stalwart and aggressive attacking winger respectively, who will step up to fill the holes left by their departures?

Nicolás Acevedo, the 22-year-old Uruguayan looks primed to take on a similar role to Sands but will need to show some continued improvement over the course of the season. While recently returned from injury Keaton Parks could definitely do a job there and has quietly been one of the best midfielders in MLS, he tends to play a different midfield role from that of Sands. As for the winger position, it’s Talles Magno’s for the taking but the young designated player who’s been quiet since arriving in MLS needs to take the league by storm this season. Especially if Castellanos does leave the Bronx, which leads to my next question…

Will Taty Castellanos stay and for how long?

The departure of Castellanos seems like it’ll definitely happen at some point but maybe in spite, Delia has been gearing up for the 2022 season with Taty billed as his main attacker. While NYCFC continues to fend off transfer offers in the range of $10-12 million, it begs the question of how long will the striker realistically stay around. It would be nice to have him around until the summer but the money talks and if somebody meets NYCFC reported $15 million price tag it’s hard to see him staying long.

If or when Taty goes, where the goalscoring threat will come from remains to be seen. NYCFC seems to have a plethora of exciting and young attacking talent waiting in the wings in Talles Magno, Santiago Rodriguez, and Thiago Andrade but nobody really staked their claim in 2021.

As shown by all the variables that occurred during this past MLS Cup Playoffs including injuries, COVID outbreaks, red card suspensions, and much more, MLS Cup is extremely hard to win let alone repeat. It’ll be a tough ask for this NYCFC team who might be without Castellanos, but they’ve certainly got the pieces and will set the bar no lower than a playoff run for 2022.

Expect a little bit of a flip from NYCFC this season with a more structured defense line behind new DP Thiago Martins but less attacking output given the prospective loss of Castellanos. They should make the playoffs yet again and will expect somewhat of a playoff run despite a tightly contested Eastern Conference.