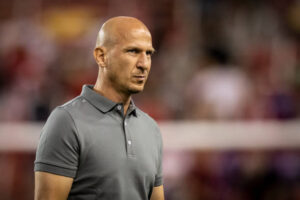 PREVIEW – The Red Bulls season preview looks at the questions heading into this season and what happened last year. Last season was a pleasant surprise for the New York Red Bulls. The league’s youngest team had its struggles early on but then surprised many by making the playoffs on the final day of the season. While the end result was another heartbreaking postseason defeat, the future is looking bright for the club. Now in Gerhard Struber’s second full campaign, the Red Bulls – while still young – are looking to raise more eyebrows in 2022. Let’s take a look at what this year could look like from many angles.

The losses of Duncan, Fabio and Gutman sting a bit but don’t pull at the heartstrings the same way losing Davis and Royer do. The latter pair are club legends who gave the club everything and will be remembered fondly. Duncan and Gutman were fine servants, while the rest were unfortunate deadwood that needed moves away.

Clark and Edwards are back via loans which gives the club depth, familiarity and versatility in key positions. Castellanos could be another Venezuelan gem in midfield, he turns 18 in March, while Nealis brings more competition in defense and fullback. Morgan comes from Inter Miami to bring much-needed experience as an attacking midfielder. But, the big one is Luquinhas who arrives from Legia Warszawa in Poland will provide the key link between midfield and attack to bring more cutting edge and creativity.

I am personally high on the Venezuelan who broke through into the first team and impressed at times. Carmona turns 19 at the end of February and is physically strong on the ball, and already has a goal and an assist to his record. More importantly is that he played in 25 games last year, started 15 and amassed over 1000 minutes in MLS. Struber has shown faith in him, and we could very well be seeing more from the young midfielder in 2022.

Will the defense continue as one of the league’s best?

Yes, the Red Bulls ended 2021 as one of the best defensive teams in MLS. Conceding 33 goals tied Nashville and Seattle for the fewest in the league. The emergence of Andres Reyes and Sean Nealis was brilliant to watch as they frustrated teams during their playoff push. However, a huge blow was dealt when the Colombian injured himself and is out 4-6 months after having surgery to repair a Jones fracture.

With one big defender out of action, one key defender returns to action in the form of Aaron Long returning from an Achilles tear. His presence is a much-needed boost will likely assume the captaincy role. The area to watch in defense is at full-back. John Tolkin will look to build off his excellent 2021 as the starting left-back while right-back is more of a question. With the return of Tom Edwards, that spot is filled and Morgan can fill in if need be. But depth will be tested in both positions especially when mid-week games and cup competitions start again.

What can we expect of this midfield?

The elephant in the room is in the form of a question: how does this team replace Sean Davis? The captain departed for Nashville and on statistics alone, it seems like a tall task. Davis led the Red Bulls in accurate passes per match, tackles per match and also played every minute of every game last year.

However, the club has options in mind that can do the trick. Cristian Cásseres Jr has played as a holding midfielder in the past and can fill the spot. If so, he’ll partner Dru Yearwood who had a really nice 2021. Youngster Daniel Edelman was signed to a Homegrown deal and will see minutes in the middle of the park, he turns 19 in April. Again, depth can be an issue so another signing in this spot could be very helpful but may likely happen in the summer.

In terms of wingers, Omir Fernandez found a groove and scored a few goals, he’ll be relied upon this year. Morgan can occupy the other flank, but let’s not forget that Casseres Jr played a good amount last year as a winger and notched career highs with six goals and three assists. All told, it’s an extremely young group with diverse skillsets among them. Casseres and Fernandez will need big years, Struber will be patient in this area of the pitch. It could take a few games before working out a consistent starting midfield pairing.

Who joins Patryk Klimala amongst the goals?

Patryk Klimala had himself a nice first season in Harrison, leading the team with eight goals and six assists. However, according to FotMob, Klimala missed 10 “big chances” and had an Expected Goals amount of 12.5. What the numbers tell us is that he’s getting into good positions, just needs to convert. If he does, then he’ll easily find the net with double-digits and make himself the talismanic figure up top. Luquinhas will likely add goals as an attacking midfielder to make his life easier.

But what about the other forwards? Tom Barlow was underwhelmed last season and will need to prove himself, should Struber go with two strikers then Barlow and Klimala are the pairings. Omar Sowe got his MLS debut last season but was quickly sent back to Red Bulls II in the USL. Graduation to the first team should come soon, he’ll add nice depth. Zach Ryan and Serge Ngoma, 23 and 16 years of age respectively, were signed to Homegrown deals and are added to the forward line. The loss of Fabio could be felt, which means Klimala and Barlow will have to step their game up to keep the Red Bulls at pace in a tough Eastern Conference.

The addition of Luquinhas was much needed and will boost the attack. Aaron Long’s return is much needed but the loss of Andres Reyes is a huge blow, making Sean Nealis more important than ever. The squad is arguably younger than last year, but with another year under Struber they can surprise yet again. A 13th straight playoff appearance will be difficult yet again.