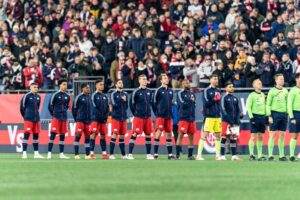 PREVIEW– The New England Revolution wrote themselves into the history books in 2021. Trophies have been hard to come by in years gone by, but we may be entering a new era. The Revs broke the regular season points tally previously held by Bob Bradley’s LAFC, before coming up short in the playoffs. Bruce Arena on the other hand, brings that much-needed level of success to the table. Tajon Buchanan has left with Matt Turner soon to follow whilst USMNT midfielder Sebastian Lletget has come through the door from the Galaxy. Will the Boston-based team be able to take that next step?

Will any more key players depart the club?

The offseason is often a busy time when it comes to players coming and going. There is a plethora of young players moving from MLS to Europe as the league begins to get more respect. The Revs have had a few of their men linked with such moves, defensive duo DeJuan Jones and Brandon Bye amongst them.

One such star who has made the move is the aforementioned Tajon Buchanan. The Canadian international was a key cog in the Shield winning New England team. It was agreed about halfway through last season that Buchanan would join Belgian side Club Brugge in the January window. The boy from Brampton has already made three appearances for them.

After his bright debut, it’s been a grind for Tajon Buchanan in his last few games for Club Brugge, but the good news is that he’s having flashes, but needs to put it all together

When he gets the ball, it can be magic. Just needs the end product#CanMNTpic.twitter.com/99vBYMPcsN

The reports from Taylor Twellman and co are swelling regarding the transfer of goalkeeper Matt Turner to Premier League outfit Arsenal. Turner, along with Buchanan, was instrumental to the success of the Revs last term. DP Carles Gil may have recently signed a new contract in Foxborough but there are a number of huge assets in the shop window. Polish striker Adam Buksa is another of those who is attracting interest from outside of the States.

How will New England balance CCL with league play?

Not only does a trophy come with the Shield success for New England but Arena’s men will also be competing in the Concacaf Champions League this time around. Along with the Revs there is the MLS Cup winning NYCFC side plus Seattle, Colorado and Montreal. The fixtures are quickly approaching, New England are in action in just six days (at the time of writing). Their campaign will get underway against Cavaly AS from Haiti- both legs taking place at Gillette Stadium for logistic reasons, which will of course favour the MLS side.

The Revs haven’t competed in an international club competition since the 2010 North American Superliga. They were victorious in that back in 2008, and that same year was the last time in which they tasted CCL action. Cavaly are one of the three teams who will be making their debut in CCL.

Andrew Farrell was @nerevolution’s first-ever No. 1 pick in the MLS SuperDraft in club history! The American defender has over 270 appearances with the Revs

New England will, of course, just like their Haitian opponents, be relishing the opportunity to take part in this tournament. That being said, there is a conversation to be had about balancing various competitions. Other MLS teams will have the luxury of a longer pre-season than the Revs and co which is a blessing and a curse in truth. It could show come the latter stages of the season but for the time being, the Shield holders will be up for speed come the beginning of the domestic season.

Can the Shield be defended?

Talking of the Shield and only three times has it been defended in MLS. Interestingly, all three of these times came back-to-back in the mid-to-late 2000s. It began with D.C. United in ’06 and ’07, with the Revs being the runners-up for MLS Cup both times ironically. Columbus Crew then followed it up in ’08 and ’09 before a Bruce Arena-led LA Galaxy team did it in 2010 and 2011.

This then begs the question of whether New England can follow suit. There aren’t many better coaches, past or present, to lead the charge than Bruce. Keeping everyone fit will be a key factor if the Revs are to challenge at the top once again. Gil was sidelined at parts last season but he was still the MVP of the league. Besides that, the majority of starters for the Revs, from Henry Kessler to Andrew Farrell, Scott Caldwell to Gustavo Bou, remained available more often than not.

Finally then, to a Last Word prediction. Seeing the likes of Lorenzo Insigne and Douglas Costa arrive in the league is fierce opposition to a simple prediction of New England retaining the Shield. With Arena’s stock in the game and the players at his disposal, I firmly believe that they will be there or thereabouts once again. The Revs will be battling it out with the likes of NYCFC, Seattle, Portland and Atlanta United to clinch the relevant silverware. I think they will top the Eastern Conference, and the regular season standings for that matter. In a repeat of last season though, the Revs won’t be able to get it done in the postseason.