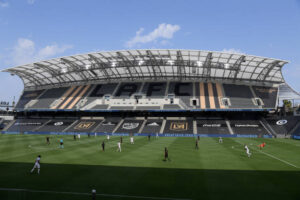 PREVIEW – Calling last season a disappointment for LAFC would be a massive understatement. The black and gold came into the 2021 season expected to finish atop the conference and push on to make a legitimate challenge for the MLS Cup. They didn’t. Not only did they fail to compete for the championship, but they finished the season outside of the playoffs for the first time since their arrival to the MLS. It was another rough year for their star forward, Carlos Vela, as another injury kept him off the pitch a nice chunk of time. Featuring in just 20 matches, with only 15 starts, finishing with five goals and six assists. A 5-2 loss on the road to the Colorado Rapids unceremoniously ended their season, as they now look to pick up the pieces. Let’s preview the 2022 season for LAFC with three big questions.

This is an interesting time for the black and gold. With a new head coach, some new personnel added in the front office, and several core players from the inaugural season, are now gone. With that has come a few big name arrivals, a not-so big named first-year Head Coach in Steve Cherundolo, and what the club is calling a new era and not a rebuild. This, is LAFC era 2.0. However, with all the changes made around and to the team, one thing has remained ever so constant. The expectations. Whether it be fans, media, or the betting public, LAFC is once again expected to finish atop the conference. Expected to compete for their first MLS Cup, and expected to bounce-back from the disappointment of last season and get back to dominating on the pitch.

The biggest question everyone has at the moment: What’s the future for Carlos Vela?

It was the biggest question for all of last season, and it’s shaping up to be the main question for this campaign, or at least for a few months anyways. After the club picked up the option on Vela, he now sits with just a few months left on said contract, with a very strong suspicion he could leave for a European return in the summer. He caused waves last season during MLS All-Star week, when he made it clear a return to Europe wasn’t out of the question, and something he would very much welcome. Just yesterday, he spoke ahead of the season and expressed his desire to want to retire in the black and gold.

“Im happy, I love to play in LA, love playing in The Banc” he said. While his desire is to remain with the MLS side, he also made it clear this was a business, and that LAFC have yet to offer him a deal. “It’s not in my hands, I am waiting for the offer from the club. If they don’t give a good thing, I know it’s business and we will move forward.” You get the sense that Vela is content in whatever the outcome is. He has pledged to work hard, give everything he has to the club in the months left on his deal, but isn’t worried about the future. If he is asked to stay, he seems willing to do so, but will not cry if he ends up leaving the club he helped built, in the summer. Either way, expect this saga to drag on until the summer when he leaves, or until the club make that offer he says he’s waiting for.

Does the team finally have a true No. 1?

YES! Objectively the biggest hole LAFC have had the last several seasons has been goalkeeper. There’s been a rotating door between the posts since the departure of Tyler Miller, and nobody has stepped up to seize control of the starting role, until now. Over the off-season the team added Canadian International,  and top three goalkeeper in the MLS, Maxime Crépeau. The arrival takes LAFC from having goalkeeper be one of the weakest spots on the roster, to now having one of the best in the league between the posts. Having arrived in a deal with Vancouver Whitecaps, the veteran keeper brings consistency on a level this club hasn’t seen in a long time.

No hyperbole, this was the signing of the offseason for the black and gold. Yes, that includes the arrival of USMNT rising star, Kellyn Acosta, who also made a departure under questionable circumstances. For Crépeau, this was a move motivated by “personal decisions” and he is just glad to be in a spot where he can continue to develop and possibly get more eyes on him for an even bigger move in the future. However, that can wait, as the Canadian pledged to stick around for at least a few years, as he helps get the team over the hump, and get some silverware into the cabinet.

Who is Steve Cherundolo?

After employing one of the stewards of soccer, Bob Bradley, LAFC opted to give the coaching vacancy to someone both familiar within the club, but unfamiliar to just about everyone else. Cherundolo was named head coach in the offseason, but you’d be forgiven for not knowing who that is immediately. The first-year MLS head coach has experience not only as a player, but an assistant for leagues all across Europe. Most notably, with Hannover 96. He eventually got the opportunity to coach stateside, taking the reigns of the USL side, Las Vegas Lights, in 2021. That stint gave him the opportunity to spend a year learning, and understanding the inner-workings of LAFC. It also gave him an opportunity to help develop some of LA’s younger talent.

That familiarity helped improve his standing within the club, and eventually led to him given the keys to the car so to speak. While many would have preferred a more house-hold name to take control of the club, Cherundolo’s familiarity gave him the edge over others. As far as first coaching jobs go, this one is a doozy. Not only is he taking control of one of the most popular clubs in MLS, but despite the short history, this is a team that demands excellence. A team that many expect, this season, to compete for the MLS Cup. Anything less than improvement, will be failure. Welcome to LA.

The Last Word: Will LAFC miss the playoffs, again?

On paper, this is still one of the most talented teams in the league. With additions like Kellyn Acosta, and Maxime Crépeau, this team has gotten even better. However, the Western Conference as a whole has improved, and even added a new challenger to the mix. Nashville SC will compete in the West this season, adding even more competition for one of the seven playoff spots. Despite having a new head coach, turnover within the squad, and the likely growing pains ahead as they welcome new players, this is still a playoff-caliber team. While I wouldn’t put them down as favorites to finish atop the conference, I do think they finish in the top four. More importantly, this is a team that needs to reach the MLS Cup Finals at the very least. Having just one Finals appearance across all competitions, given the construction of the team, has been unacceptable. The clock is ticking, and the honeymoon period is over. It’s time for LAFC to become the club they always made themselves out to be.