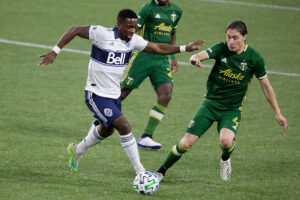 PREVIEW – The 2021 Vancouver Whitecaps season preview is just around the corner. 2020 was turbulent, to say the least for a lot of people, the Vancouver Whitecaps FC included. Living out of a suitcase in a hotel room in a different country wasn’t what a lot of the new arrivals had signed up for. Yet, throughout it all, Vancouver fell just three points short of the final playoff spot.

Several young players broke into the squad with the “Play the kids” movement, and year two of Marc Dos Santos’s three-year plan had come to an end. It had been a first step in the right direction after a woeful 2019 campaign, so some sort of light at the end of the playoff drought tunnel was well received by fans.

Every manager (except probably Caleb Porter with Columbus) is telling his players and the media that this year will be better, so why should you believe Dos Santos? Well, let’s take a look at some of the changes and storylines heading into this year with our 2021 Vancouver Whitecaps season preview.

A slow and quiet offseason quickly turned into a reason for the Whitecaps faithful to get excited. Two exciting first-round MLS draft picks in David Egbo and Javain Brown. A flashy, electric dribbler for the left-wing in Deiber Caicedo. A ball-playing, aggressive holding midfielder in Caio Alexandre who turned into the Caps’ second most expensive signing. And finally, Bruno Gaspar is on a one-year loan from Sporting Lisbon to improve the attack from the right-back spot. What did it cost?

While Caicedo, Alexandre and Gaspar are all improvements in their respective position, there is one big box that still hasn’t been checked off. That ever-elusive number 10. Not that they haven’t tried though.

In 2020, Cristian Dajome (pictured above) and David Milinkovic both tried to fill that hole, before Fredy Montero came in and almost single-handedly revived Vancouver’s playoff push. Then the team tried to do some intra-league shopping as links to New York Red Bulls’ playmaker Kaku first came about. Then it was Chiquinho from Benfica and Otavio from Porto (Dos Santos’ boyhood club). Yet they couldn’t get a deal over the line.

So how does a team cope by letting a player who had lead the team in assists, and second in goals, shots and shots on goal, walk to arguably their biggest rivals on a free transfer? Good question. Typically, you would replace him, but in the meantime, you switch formations.

What actually is Vancouver’s best formation?

In 2020, Dos Santos was rather inconsistent for the most part. Putting out 4-2-3-1, 5-3-2, 4-4-2, heck even at one point we saw a 3-4-3. While it looked on paper that the team could pull off a 4-3-3, an exciting attacking formation that also gave enough support to the defence, Montero’s departure took with it the dream of a 4-3-3. As boring as it sounds (and Vancouver fans put up with enough “boring” last year), a 4-4-2 makes the most sense for what Dos Santos is trying to achieve.

The good thing about soccer is that 90 minutes is a long time to stay in the same formation, so this is a 4-4-2 with a twist. Over several interviews and press conferences over the past week or two, it seems like the team will start and defend in a 4-4-2, however, the formation will switch to a 4-2-3-1 on the attack.

Dajome seems like he will be the one to start upfront with Lucas Cavallini, and then drop into a centre forward-like spot in behind to help link up the midfield to the attack. He played a similar role in the MLS is Back tournament down in Orlando and grabbed a crucial goal in the 2-0 win vs Chicago Fire last summer. From the small sample size of what we’ve seen in preseason, he seems to work well with the high press coming from the wings as well.

The odd man out here does seem to be Russell Teibert, whose attacking ability is limited. So playing him on the left-wing doesn’t make sense. Ali Adnan showed some promise at an attacking spot, but Visa issues could rule him out for the first game or two. Academy prospect Kamron Habibullah has turned a lot of heads this preseason and could provide some depth to the left-wing spot, but an inexperienced 17-year-old as the only player to naturally play that position is cause for concern. Ryan Raposo is in a similar boat, where he’s close to being a starting 11 calibre player, but still needs to develop.

Yes and no. Theo Bair has seemingly bulked up a bit and has improved his physicality. Mixed with his athleticism and speed, he will be a handful for defenders off the bench. Veteran Tosaint Ricketts seemed to be in the right place at the right time last year, with a pair of goals is not a lot of appearances. His experience and leadership will make up for his age and inability to play substantial minutes.

Then David Egbo, who has been praised by his college coach as “one of the most skilled players he (Jared Embick” has coached in nearly a decade with Akron. His willingness to shoot and off-the-ball movement make him a playmaker’s best friend. Then finally the six million dollar man, Lucas Cavallini. Only six goals in 18 appearances aren’t a lot to write home about, yet El Tanque seemed in great form this preseason.

So Vancouver has the talent absolutely, not to mention the quality wingers and attacking fullbacks. But more goals isn’t necessarily a guarantee. A 4-2-3-1 formation leaves only one striker (inevitably Cavallini), and Dajome playing out of position. Until this number 10 arrives, I wouldn’t be expecting a massive gap in goals. Maybe in his second year, Cavallini can find some form and get settled in, but that’s a lot of weight on one man’s shoulders.

During the six-game Canadian series last year, viewers saw another outbreak. No not of a variant or anything. An outbreak of younger players getting regular minutes for Vancouver. Michael Baldisimo, Patrick Metcalfe, Theo Bair, Christian Gutierrez, Thomas Hasal. The list goes on and on. It was a refreshing change of pace to see players come in with different styles to the typical senior players. Baldisimo could string together 3o-yard passes whenever he wanted, Bair provided more movement up front than Cavallini, the whole situation was eye-opening.

This helped land five Whitecaps in Canada’s U23 Olympic qualifying squad which reached the semifinal of the qualifying tournament a few weeks ago. A high-level preseason tournament was a blessing for the Whitecaps, helping whip the likes of Derek Cornelius, Bair and more into regular-season form. With the club’s depth lacking in the winger and full-back department, some of these young Canadians could expect an increase in playing time in 2021.

From the mouths of several different Whitecaps players, “it’s playoffs or bust” in 2021. Starting off the season in Utah seems a much better way to get adjusted rather than switching to Portland midseason and living in a hotel. Between the living situation, the plan to be back in Vancouver by July with fans, and the squad upgrades, 2021 seems to be looking positive. Missing the playoffs by three points with a depleted squad in 2020 bodes well for this time around, so they absolutely can sneak in down the stretch.

The Vancouver Whitecaps season prediction is finishing seventh in the Western Conference and play in the playoffs for the first time since 2017.