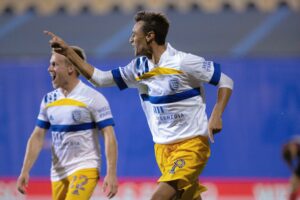 PREVIEW- The San Jose Earthquakes rode yet another offseason of “Matias Almeyda is leaving” rumors to the start of 2021, and are looking to build off their 2020 season in which they made the postseason for just the fourth time since the club returned in 2008. Will Wondo get a shot at a trophy? What young American you haven’t heard of is ready to breakout? All those will be discussed in this San Jose Earthquakes season preview.

Last season the Earthquakes lost Magnus Eriksson, who went back home to Sweden following the club’s MLS is Back campaign. Their captain at the time and number 10 left a hole in their attack, and more so their defense for a portion of the re-start. Then, the Earthquakes kicked it in gear. Nick Lima’s resurgence as their main choice at right-back was part of that, but a situation behind the scenes cast a shadow and he was eventually dealt to Austin FC.

Matias Almeyda over-used the phone a friend function this offseason, making all non-draft pick additions to the organization players he had worked with previously. Remedi both worked alongside Almeyda with Banfield, Abecasis worked with him at River Plate, and Chofis Lopez at Chivas. Time will tell whether or not they make an impact.

Is it time for the Cade Cowell breakout?

Cowell featured heavily for the 2020 Quakes off the bench and came close to scoring multiple goals, but his finishing touch was lacking. Cowell, who will be 17 for a majority of the 2021 season, made 17 appearances in 2020, but only averaged 27 minutes per appearance. Even further, he only started four matches, for an average of 64 minutes played in those starts. That means the majority of his appearances were as a substitute, and in THOSE appearances, he only averaged 17 minutes a match. So why does that matter?

Well, in 17 appearances, averaging less than 30 minutes of gameplay, he had 18 shot-creating actions and two goal-creating actions. Why use actions over xG? The sample size is too small to justify using the xG numbers. Clearly, the kid makes stuff happen even in limited moments. But, he only scored one goal and notched one assist. Sooner or later they’re going to start ending up in the scoresheet. I would like to believe that given the significant progression we saw from him of the last year and a half, that the breakout is coming this year. He should be a player to watch for the Young Player of the Year award.

Can Almeyda-Ball be sustained over a consistent 34 game stretch?

This is a question that I think is key to success. Almeyda’s “pants on fire” mdoel for defending as a squad is predicated on possession. Last season, when Andy Rios was very clearly NOT ready to step in and be their number 10, the possession aspect of the Earthquakes stuttered and they were forced to constantly defend in their hellish manner, over-exerting themselves in the long haul of a congested schedule. The stretch run in 2021 will be as congested as the 2020 season was. Will Almeyda adapt? Or are they confident that the depth of the squad can pick up as they go?

The San Jose Earthquakes lone year of 34 games of Almeyda-ball resulted in two miserable stretches to start, and close the 2019, which was sandwhiched in betweetn an electric 17 game stretch. Why is 17 games important? Well, that’s what Almeyda’s Chivas teams played in their Apertura and Clausura campaigns in Mexico.

The Earthquakes point total over that 17 game stretch was more than Club Santos, who finished top of the Apertura campaign in Mexico. Curses to the new league website which took away the form guide so I can show this, but for now you’ll have to take me at my word. IF the Earthquakes go on a torrid 17 game stretch, can they not be equally awful for the other 17 games? If so they can make the postseason. But the question of whether or not they do that rests in the hands of Almeyda — for tactical and team selection purposes, and the bench players who need to match the level of the player above them in the depth chart when they get their chances to play. They will be needed.

This is a tough ask. It’s hard to see the Earthquakes close to contending unless they bring in at least one significantly impactful, and high-profile designated player in 2021. With the US Open Cup not happening anymore, that’s one less trophy out there for Wondo to grab. Can the Quakes grab the Shield? Probably not. Can they grab the Cup? Maybe if they peak at the right time. But I’d be hard-pressed to find the opportunity the Quakes will present in 2021 for Wondo to win a major trophy with them. Now if the Quakes are terrible and Wondo can find a mid-season trade partner to a contender, that seems the more likely of any scenario in which Wondo hoists a trophy in 2021.

The San Jose Earthquakes will be entertaining for all the right and wrong reasons, playing contrastingly beautiful and abhorrent soccer over this 34 game season. Their hot stretch will be enough for them to finish 8th in the West for the 3rd year in a row. They just don’t have the benefit of expanded postseason play in 2021.