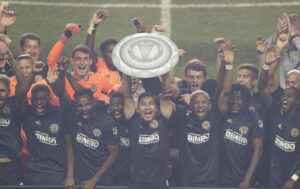 PREVIEW- The Philadelphia Union are coming off a disappointing end to their best season in club history. Despite a strong showing in the MLS is Back Tournament in 2020 and a Supporter’s Shield winning campaign during the COVID-ridden season of 2020, the Union crumbled in their first playoff match, unable to severely threaten the New England Revolution backline. The 2021 Philadelphia Union season preview takes a look at just how close to the pinnacle they can get in 2021.

The Philadelphia Union’s entire motive will get put to the test in 2021. Their tactics will stay the same, despite large holes at both center-back and attacking midfield. Brendan Aaronson is balling out in Austria with Jesse Marsch, while Mark McKenzie is having a tougher go with Genk in Belgium. Ray Gaddis also retired, which may or may not leave a veteran-sized locker room hole. The club brought in Stuart Findlay and Leon Flach, the latter of which may get more playtime as Jose Martinez is routinely involved in Colombia call-ups. Findlay is a wide player and most certainly fits into the role of a substitute than a regular given the system that Philadelphia use.

Normally clubs bring in players to directly replace holes that were as large as the ones Aaronson and McKenzie left behind. But that’s not the Union M.O. So while we’ll talk about their new signings, these aren’t going to be like for like replacements, which leads us to our first question of this year’s Union squad.

Can the Union execute “Part 3” of their plan?

Ok, I don’t really know if we are in “part 3” or “phase 3” of their master plan. But this feels like the third step in the overall vision of the club:

Step 1: Develop enough academy prospects into the first team in their system.

Step 2: Develop those first-team prospects into sellable assets while winning on the field.

Step 3: Sell on those prospects, and continue the cycle to the point all three phases happen simultaneously.

We’ve seen many American clubs get to phase 2, but couldn’t continue said cycle of youth players. Only FC Dallas seems to have been able to get through phase 3 and continue building out their first team roster with talent after talent despite many leaving just after arriving with the first team, or prior, yet FC Dallas has continued to be in the postseason year after year.

A lot of that rests on the shoulders of Anthony Fontana, an academy prospect who we’ve seen plenty of times over the last few seasons. However, it was Brendan Aaronson who made that “No. 10” role his own the last couple of seasons. Now is Fontana’s chance. It won’t be the same, certainly. Aaronson was of a different class. But can Fontana be as productive? That’s the important question for the Union.

Jakob Glesnes will replace McKenzie, which is much less of a question mark than Fontana over Aaronson. Glesnes has shown he can be a strong CB, and Jack Elliott playing alongside with next to no disturbances in the rest of the backline should give Jim Curtin some comfort there. The good thing for the Union is that Glesnes and Fontana are already indoctrinated into what Philadelphia preach, which doesn’t happen quite so much when you chose to replace key players directly from outside the club.

Does Sergio Santos break out?

Without the creative exploits of Brendan Aaronson, the Union may need just a bit more “oompf” from their striker core. Don’t get me wrong. Kacper Przybyłko and Sergio Santos were good last season, and we’ve seen Corey Burke bag goals as well. Sergio Santos saw a much better 2020 campaign than his 2019. Santos is a large guy who certainly had his chances in 2019, but only converted five of them. In 2020 he bagged 11 goals in 29 appearances in all competitions and looked like he was starting to come into his own in the league. If the 26-year-old striker can push 15 goals on the season, the Union should be high up in the table given the attacking exploits that also surround Santos. The system will give him chances as well, but if can’t finish them, then that will be a problem.

Who is the next Union Academy product to break out?

There are certainly plenty of names to watch. Jack DeVries is a name a lot of people are waiting to see break-out and rightfully so. MLSSoccer.com had him pegged as their young player to watch. And while Fontana is still just 21, we know who he is, and have seen him. The question surrounding him is whether or not he can raise his game from what we’ve seen. When discussing a breakout young player, I’m looking to be wowed by someone I have never seen before. My candidate’s last name is just a little familiar.

Paxten Aaronson went on a weaving box-to-box run during the pre-season and scored a goal that made some waves on the niche space of “MLS Preseason Twitter.” Like his brother, an attacking midfielder, Paxten loves to take players on 1v1, and at the youth levels has shown a level of creativity and final product that only his brother has come close to. Could Fontana be ousted by an Aaronson yet again? It’s entirely possible. The Union love what he brings to the table and if Fontana is struggling don’t be surprised if we see the name Aaronson penciled in at number 10 plenty of times this season.

The Philadelphia Union will make the postseason and likely end up middle of the playoff pack in the East. But in CONCACAF Champions League, they will bow out in the Quarterfinals to Atlanta, who should be firing on all cylinders by the time they meet.