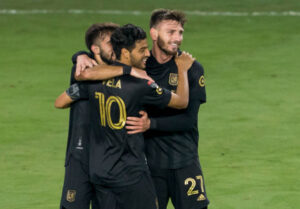 PREVIEW – The time is now. The importance of the 2021 season for LAFC, can’t be overstated. While the black and gold have achieved success in their first three years, they have yet to achieve their championship aspirations. There is expectation, that will change this year. While the weight of that pressure would crumble most teams, LAFC aren’t the types to shy away from it.

Last year was a rough one for LAFC. In addition to finishing all the way in seventh last season, they never really had a chance to play as a unit. Carlos Vela pulled out of the MLS is Back tournament, and subsequently tore his MCL in his first match back. His was just one of several injuries LAFC had to overcome. While there was disappointment, there was also a silver lining. They achieved something in 2020, they had yet to, reaching their first-ever Finals match, in the CONCACAF Champions League.

You’d be forgiven if the only addition to the squad on your mind was South Korean International defender, Kim Moon-Hwan. The 25-year-old right back came to LAFC via the K League, and was acquired using Target Allocation Money (TAM). While he has been the talk of the offseason, fans will likely have to wait to see him in action. He has arrived with an injury, and while not serious, as head coach Bob Bradley said, “It’s not serious, but it still has slowed him down.”

Needing depth along the backline, LAFC also acquired 22-year-old defender, Marco Farfan, from the Portland Timbers for $300,00 in General Allocation Money (GAM). While Diego Palacios has the starting left back role cemented, the arrival of Farfan, who featured in 14 matches in 2020, will be more than welcomed.

In the surprise move of the offseason, LAFC were able to acquire 24-year-old RSL homegrown winger, Corey Baird. Baird’s arrival filled a much needed hole left by the departure of three attackers this year. After just two preseason games, he’s made his presence known with his ability to make a run, pick out a pass, and flash his quickness. While it may take a few matches for him to find chemistry with his teammates, once it clicks, this attack will be even harder to contain.

Both Bradley Wright-Phillips and Adama Diomande chose not to return to LAFC. Diomande had his contract terminated when he departed back in August 2020, due to personal reasons. However, BWP was offered a contract in the offseason, and turned it down to sign for Columbus Crew. Brian Rodriguez was loaned out to UD Almeria, in a move that could become permanent should he meet performance goals.

While LAFC have seemingly endless young talent, the player poised to really breakout this season is 22-year-old midfielder, José Cifuentes. The Ecuadorian has had an impressive preseason so far. With all eyes on what feels to be an inevitable Eduard Atuesta move, Cifuentes is ready to show his replacement is already at the club. Look for him to get more involved in attack, and look more confident pulling the strings.

In addition to a shaky defense at times last year, LAFC also faced inconsistency between the posts. After two preseason matches, the answer is still a bit unclear. Both Pablo Sisniega and Kenneth Vermeer started, and both seemed to struggle at times. Smart money says Pablo Sisniega gets first crack at cementing a starting role, with the 25-year-old looking slightly more confident in the role. Even the greatest defenses wont achieve perfection, so a starting keeper must be one able to salvage results when things aren’t going the team’s way.

Is This Year Championship or Bust?

In short, and simply, yes. The time is now. It was just last year that Carlos Vela himself declared the season a failure should they not lift the MLS Cup. Granted, this was before Covid rapidly spread, he suffered a freak, long-term injury, and 2020 became a year to forget immediately. However, the time is now for LAFC, who have been built to win it all from day one.

After a historic 2019, a first Finals appearance in 2020, and several talented new arrivals, LAFC are all-in. The only thing that should stop this team is health. This team, should they remain healthy, need to appear in the MLS Cup Finals at the very least, and win it to call this season a true success.

Can The Midfield Improve on Keeping Possession?

The biggest misconception last year was the idea LAFC had a poor defense. It became such a frequent narrative, Bob Bradley had to issue a challenge. He challenged media to watch the midfield more, so we did. A majority of the goals allowed were, as he suggested, the product of poor possession in the midfield. Whether it was a player being dispossessed, bad passing, or general sloppy play, the midfield struggled often in 2020. If the midfield can improve even just a little, this will be a team looking at another historic run a la 2019. Due to the incredibly short preseason, as with all these questions, answers wont be seen for a few weeks.

It’s a bit harsh to say team in only its fourth year of existence, needs to win a championship to consider the season success. However, that’s where Los Angeles are right now. A product of their own ambitions and ability. An expectation that is felt throughout the entire club, from top to bottom, they tell you straight up what they play for. Keeps.

While the Western Conference is shaping up to be a bloodbath, LAFC are still the favorite. As they should be. In addition to finishing first in the West, this team will reach the MLS Cup Finals. They will win that Finals match, and they will lift their first championship. Their time is now.