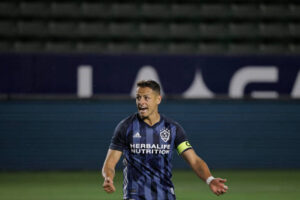 PREVIEW – The LA Galaxy had a disaster of a 2020 season. New DP striker Chicharito Hernandez underperformed, scoring just two goals and not being healthy. Guillermo Barros Schelotto didn’t implement a style of play that worked. He was fired. The team missed the MLS Cup Playoffs, again. Another overhaul was needed in the off-season. Let’s take a look at where things stand with a 2021 LA Galaxy season preview.

Greg Vanney joined the club as head coach from Toronto FC. The club has made a few international signings at key positions. Everyone was waiting to see if Cristian Pavon would be signed permanently. With legal proceedings due to being charged with rape, it looks the Galaxy have moved on from their former MVP candidate.

It’s clear that the Gs have moved away from pursuing Pavon with the signing of Kévin Cabral as a Young Designated Player. He now joins Victor Vazquez, Sebastian Lletget (suspension notwithstanding), and Efraín Álvarez who will be looking to create chances and score goals from midfield.

The defense might finally have some quality talent. Jonathan Bond comes in to play goalkeeper from West Brom. Center back Derrick Williams comes in from Blackburn Rovers, having been a regular starter in the English Championship. Both are massive upgrades over their predecessors.

Lastly, is this finally the year that Álvarez arrives in MLS? He’s still just 18-years-old, but so far hasn’t justified the hype from a national team or LA Galaxy academy perspective. Can he at least become a regular super sub who’s productive? We shall see.

Will Chicharito Hernandez and the supporting cast score?

If you believe his interviews and social media posts, Chicha’s a new man in 2021. He’s emotionally, physically, and mentally in a better place than he was in 2020. Greg Vanney’s first order of business on the field will be to get their multi-million dollar striker scoring goals. The tactics and the player appear to be good to go.

The other question is the cast around him providing service. Cabral and French TAM signing Samuel Grandsir will firstly be responsible for that. For the Galaxy FO to really show they’re turning things around, these signings (and the defensive ones) have to pan out. They must adjust to MLS, Chicharito, and the language to have success. Vazquez and Lletget will provide further service from midfield.

If Chicharito can get at least 15 goals and the rest of this group average 5 goals per player, the Galaxy should be back offensively.

Is the backline finally going to be ok?

And then there’s the backline. This unit has been in shambles in recent years. The Galaxy haven’t hit on a center back signings since Jelle Van Damme. Williams and Bond have to stabilize their respective positions. Add in Jorge Villafaña at left back, and they should be set out wide. Look for Julian Araujo to play regularly on the right, iff he’s not getting red cards.

With Daniel Steres, undertalented and hardworking, at the other center back and LA should have their best backline since at least 2016. There is the question of the midfield in front of them. At times the last few years, the backline was overexposed by a midfield that was too easy to bypass or dribble through.

With Perry Kitchen gone (flawed as he was), there’s no hardnosed tackler in front of them. Jonathan dos Santos isn’t running for 90 minutes and winning 50-50 balls. Can Lletget fill that role? Maybe. Is that where he’s most comfortable? Probably not. The lack of a dedicated starting No. 6 is a concern.

How much progress can the Vanney rebuild make in 2021?

Vanney and Dennis te Kloese have made it clear this is a multiple year project. We’ll see if upper management have patience with Vanney in ways they haven’t with his predecessors. This team should be more competitive this year, but missing the playoffs isn’t a total failure. They need to start to build for 2022 and/or 2023.

They appear to have done that with the international signings they’ve made. Vanney had a good track record with young players and Homegrowns at Toronto. That’s an area of needed improvement for the Galaxy given all the Homegrowns they’ve signed for Los Dos.

GDS spent two years here and never looked like he was building to something better long term, tactically or culturally. Vanney played for the Galaxy. He won almost everything he could at TFC. He understands the club. He needs to show this year that things are getting better and can continue to do so.

The LA Galaxy will be much better at both ends of field. Chicharito will score double-digit goals in league play. They will narrowly miss the playoffs, finishing 8th in the Western Conference, but will be favored to make it back to the playoffs in 2022.