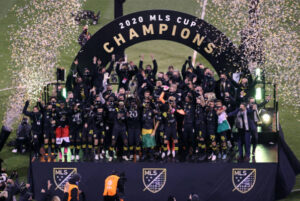 PREVIEW – Columbus Crew SC won MLS Cup last year. They won all three group stage games of the MLS is Back tournament, before losing in the first round of the knockout stage to Minnesota United in penalties. They played well in the altered regular season to finish third in the Eastern Conference. After winning three close games in the MLS Cup Playoffs, they dominating Seattle Sounders in the final. Lucas Zelarayan stole the show in the 3-0 victory. Save The Crew has become Savor The Crew as we look ahead to this 2021 Columbus Crew season preview.

It’s crazy to think the MLS Cup champions got better and didn’t lose anyone significant in the off-season. Sebastian Berhalter has gone on loan to Austin FC, coached by former Crew assistant coach Josh Wolff who knows him well. Fatai Alashe is the biggest departure in terms of 2020 minutes played (466). All their starters and key substitutes are back. With Berhalter on loan, look for Aidan Morris to try and work his way into the team sheet more regularly this year. He played in nine games last year, four as a starter. With all the fixture congestion this year, he could help take some minutes off the legs of key starters and contribute.

In terms off additions, the Crew doubled down on their areas of strength with depths. Stealing Kevin Molino away from Adrian Heath and Minnesota as a free agent was one of the biggest signings of the offseason. They also got Bradley Wright-Phillips via free agency as he’s chasing a ring. With Molino, Zelarayan, Gyasi Zardes, and Pedro Santos, they have the best front four in MLS. They could score the most goals in the regular season this year. Marlon Hairston provides a depth option at right back.

What is their ceiling with Kevin Molino joining the potent attack?

Molino was the best player available via free agency this offseason. Hot Boy should be the best secondary option for chance creation in the league, next to Zelarayan. It’ll be curious to see how Head Coach Caleb Porter deploys all of these players. If Molino and Zelarayan can combine well, this should be the best offense in the league with Zardes contending for the Golden Boot. But a 4-2-3-1 with Molino, Zelarayan, and Santos doesn’t have a lot of width and the defensive work rate, especially when pressing, could be better. Luis Diaz and Derrick Etienne Jr. could be deployed regularly to help with that. It’s believed that Pedro Santos broke the club’s transfer record in 2017. Amazingly, he’s now the fourth most significant attacking player on the roster.

If this team plays up to the sum of their parts, they’re unbelievably better than they were last year. They should contend for MLS Cup again. With a weakened Eastern Conference (Philadelphia selling players to Europe, Toronto FC aging, NYCFC not making significant signings, Atlanta in transition), they should compete for the Supporters’ Shield. With a solid defense led by Jonathan Mensa, they could make a run at Concacaf Champions League. They’ve got a favorable matchup in the Round of 16 against Real Esteli. If they get past them, they’ve got as good of a chance in CCL as any of the other MLS teams going up against the Liga MX teams.

How will the new stadium impact the club this season (and long term)?

We’ve seen what a new soccer-specific stadium can do for an MLS club. The last several years for the Black and Gold reminds me of Sporting KC’s evolution away from being the Wiz. Columbus updated their crest and branding several years ago. There’s a new local ownership group who are committed to the team, city, and funding a competitive team. Now they’re getting a new stadium that should continue the revitalization of the club.

Does the new stadium bring in enough ticket, sponsorship, and suite revenue for Columbus to compete with Atlanta, Seattle, and the LA teams financially? That remains to be seen. But a new stadium with regular sellouts (vaccine distribution willing) will allow the club to sign more players on the level of Mensah, Santos, et al. Porter proved when he coached Portland Timbers that if he was backed financially, he could produce a competitive team. The Crew are on the precipice of that for the long term. If the new stadium allows them to break their proverbial glass ceiling, Porter could find himself managing super club aspirations based on the first team budget.

Can they win a trophy, and if so which/how many?

MLS Cup champions historically don’t repeat. No one’s done it since the LA Galaxy who won back-to-back in 2011 and 2012. Columbus hasn’t lost anyone significant from last years team and they’ve stacked strength on strength with the players they’ve added. With the contract lengths at present, the core is locked in to win another cup and potentially make a run at being a dynasty. For me, they’ve got as good a chance of repeating as the recent Seattle and Toronto championship teams.

Columbus Crew will win the Supporters’ Shield in a weakened Eastern Conference. They will lose in MLS Cup to Los Angeles FC. They will not become the first team to win CCL this year.