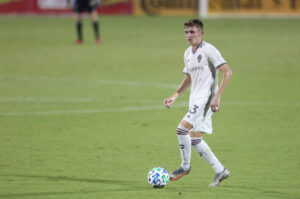 PREVIEW – The Colorado Rapids thrived in the face of chaos in 2020. Despite a COVID-19 outbreak that almost derailed their season, they made the playoffs. The young players largely got better with Sam Vines and Cole Bassett becoming youth USMNT household names. Robin Fraser made progress as head coach. Unfortunately for Colorado, they lost 3-0 in the first round of the playoffs to Minnesota United FC. What’s in store for this year? Let’s take a look with our 2021 Colorado Rapids season preview.

The Rapids had one of the lowest offseason roster turnovers in MLS. Just three players, Deklan Wynne, Nikki Jackson, and Abdul Rwatubyaye, departed the club. Wynne didn’t play at all in 2020 due to injury. Jackson and Rwatubyaye spent the entire season on loan in the USL. Their departures will have little effect on the first team.

Colorado returns all of their starters and first choice bench options at every position, making them one of the deepest teams in MLS.

Added to that are Michael Barrios and Philip Mayaka. Barrios was acquired in a trade with FC Dallas. He’s been one of the best budget chance creators in MLS over the past several years. He’s looked great in preseason and will complement Younes Namli and Cole Bassett well.

Colorado traded up to third in the SuperDraft on draft day and lucked into Mayaka, who fell to third and was regarded as the most talented midfielder available in the draft. He’s with Colorado Springs Switchbacks on loan currently but will add serious depth and versatility to Fraser’s fluid three-man midfield.

Bassett arrived in MLS last year, leading the club in goals and assists (five each). He’s still just 19-years-old. With the USMNT failing to make the Olympics, Bassett’s year won’t include much national team play. Look for him to get 15 G+A with Colorado and start almost every game. He could be the next American to earn a multi-million dollar transfer to Europe like Brendan Aaronson if he has a great year.

Barrios will add to chance creation, but who’s scoring the goals?

Colorado now has a plethora of excellent passers. Namli will be looking to improve as the club’s only DP in his second season in MLS. Barrios and Bassett can find and exploit space in the final third. Jack Price will again be taking corners for the MLS Set Piece Kings.

But with all that service, who will be scoring the goals? Diego Rubio and Andre Shinyashiki will play almost all the minutes at center forward and combined for just seven goals last year. Prorated for a 34 game season, that’s 13 goals. Fraser will likely be relying on goals by committee with Jonathan Lewis and other wide players chipping in. This team still doesn’t have a match winning attacking player that prevents them from being an elite MLS team.

Look for Rubio and others in the front three to increase their goal totals from last year and the center backs to contribute on corners. They might not have a ten goal scorer come November, but they could have a bunch score more than five.

How will the youth movement pan out?

Under Padraig Smith and Brian Crookham, the club’s youth movement has gotten a great return on investment. They’ve produced multiple Homegrowns who are MLS starters. While they haven’t spent big internationally, they’ve cornered the market on buying young domestic players out of non-ideal club situations at reasonably value. They’ve also made savvy moves at the draft.

Bassett and Vines are be watched by European scouts. Auston Trusty and Jonathan Lewis are working to become regular starters on this team. Briain Galvan and Mayaka are still acclimating to MLS.

Will the kids produce at a high level this year? Can Lewis finally become a regular and productive starter in MLS? Will any of them be sold abroad? Their play this year could determine how far Colorado goes in the playoffs and what the club’s long term finances look like.

Will the team learn from last year’s playoff loss?

Robin Fraser was smiling at the end of the playoff loss to the Loons. He was already thinking about next year. The players and coaches learned a lot from the adversity of last season. Minnesota taught them a lesson on execution and ruthlessness in the playoffs. In many was the 2020-21 Rapids could mirror the 2019-20 Minnesota United transformation:

An improved team that needed a few pieces added. A head coach who’s grown in his role and developed his tactics. A playoff loss to a talented team that at times they outplayed but ultimately lost to. They came back stronger and used the pain and lessons from that loss to get back to the playoffs, win, and make it to the Conference Finals.

The Rapids again look to be a team that plays solid as a collective. They are still prone to mistakes at the back, but when they play up to their potential, they can beat any team in this league. Their ceiling is probably 4th in the Western Conference with their floor being just outside the playoffs.

The Rapids will finish 5th in the Western Conference and return to the MLS Cup Playoffs.