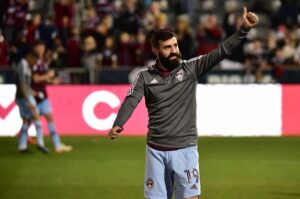 This fourth year of awards consist of nine individual and three event/team awards based on relevancy and significance.

Player of the Year:

The most outstanding player for the club in 2021.
Winner: Jack Price
Runner-Up: Michael Barrios

Newcomer of the Year:

The most outstanding player who was in their first year with the club ever.
Winner: Michael Barrios

How Michael Barrios has predictably transformed the way #Rapids96 play in transition.

Young Player of the Year:

The most outstanding player aged 23 or younger as of January 1, 2021.
Winner: Auston Trusty
Runner-Up: Braian Galván

Trusty v Wilson. Crazy that trusty has much better numbers with the ball. Also proves that Trusty was truly one of the best center backs in MLS this season#Rapids96 pic.twitter.com/2DVSGwjN8r

Underrated Player of the Year:

Danny Wilson’s #Rapids96 turnaround personifies ‘The Rapids Way’ and #KeepFighting. I explore his transformation in confidence, leadership, and defensive quality for the @rapids96podcast Substack: https://t.co/mWQbQCW1Mv pic.twitter.com/TjEWeV3BLH

Most Improved Player of the Year:

The player who is most improved between last season and this season. Players who were not with the Rapids first team in 2020 are eligible.
Winner: Auston Trusty

Loan Player of the Year:

The player who was the most outstanding while on loan away from the Rapids first team in 2021.
Winner: Kortne Ford
Runner-Up: Sebastian Anderson

“All for you Momma, keep fighting”

Kortne Ford dedicates this goal to his mom

Ford went on loan to San Antonio FC. He played regularly at center back, leading SAFC to a home game in the first round of the playoffs. They lost in the Conference Finals to Orange County SC. Ford recently started a GoFundMe for his mother Laurie, who’s ended her cancer treatment to focus on quality of life. “I’ve known them for my entire seven years here. There’s no stronger person than Laurie. [She and Kortne] are going to be a part of this club for a long time,” Rapids Executive Vice President and General Manager told Last Word.

Best Game of the Year:

The most impressive result or performance of the season.
Winner: 5-2 at home vs LAFC on November 7

Worst Game of the Year:

Goal of the Year:

The most significant/memorable goal of the season, including PKs.
Winner: Michael Barrios at Portland Timbers on September 15 in a 2-2 draw.

How did that one go in?!

Michael Barrios scores from the tightest of angles

Play of the Year:

The most significant/memorable play of the year that was not a goal. Assists are eligible including assists to goals that are nominated for Goal of the Year.
Winner: Braian Galván’s assist to Mark-Anthony Kaye to win the August 21 game vs RSL

What a time to score your first #Rapids96 goal!!

Story of the Year:

The most significant/memorable play of the year that was not a goal. Assists are eligible.
Winner: Winning the Western Conference despite all the doubters, no All-Star, one Designated Player, and not being in first till Decision Day

On the first place Colorado Rapids and how it was three years in the making.

Robin Fraser: “Literally the first day I led training with the team” he knew this group could be special.
Pádraig Smith: “We felt we could build something, we really did.”https://t.co/CIaxhasioL

Quote of the Year:

The quote that stands out the most from any Rapids player, coach, or front office member.
Winner: “Roly Poly Dinky Doodle.” – Jack Price

What a man that @jacko_8

The Rapids press corps still isn’t sure what exactly it means. That’s part of why what makes it and Price so endearing.