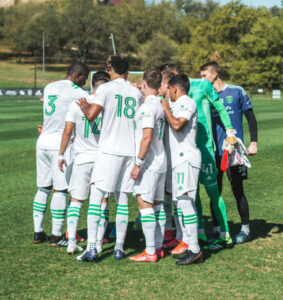 PREVIEW – Austin FC, MLS’s 27th team, make their long-awaited debut this season. Texas’s capital city will finally have its first major league professional sports team, with a highly energized fanbase ready to make their prescience known. Verde supporters will have to wait until June 19th before they get to cheer on their team at home. In the meantime, Austin will begin their season with a grueling seven-game road trip that begins with many pundits MLS Cup favorites, Los Angeles FC. Let’s take a look at all things Verde with an Austin FC season preview.

According to Austin FC President Andy Loughnane, Josh Wolff and Claudio Reyna have ‘chemistry’. That’s evident. From the moment Wolff arrived, departing his role as Greg Berhalter’s right-hand man in the USMNT coaching set-up, and Reyna from his role as Sporting Director at NYCFC, they have been entirely in sympatico.

Everything each has learned during their storied careers as players and since, has clearly benefited Austin FC. The clubs’ already impressive academy program is a passion project for Reyna. The world-class training facilities at the multi-million-dollar purpose-built St. David’s Performance Center has Wolff’s fingerprints all over it. And most importantly, the strong roster certainly reflects the combination of the two men’s player evaluation and recruiting acumen.

Alex Ring is the most obvious example of that. Former Finnish international Ring has distinguished himself over the past few seasons as being one of the best defensive midfielders in all of MLS. NYCFC valued him so highly that after David Villa departed, they named him captain. Ring has subsequently been handed the captaincy at Austin FC, too. Wolff and Reyna will be hoping that his obvious ability and natural leadership skills help establish ‘the legend’ of Austin, as team part-owner Matthew McConaughey likes to put it.

Speaking of owners, one cannot preview Austin FC without mentioning Anthony Precourt. Austin’s majority owner cuts a divisive figure to some in the sport. However, once Precourt wholly turned his attentions toward building a team from scratch in Austin, for Austin, by Austin, no one could suggest that he hasn’t been a good thing for Austin – and for MLS. Q2, the soccer-specific stadium that ATXFC will call home (affectionately termed ‘The Tree House’ by some fans), represents an impressive and sincere commitment to the team, its fans, and the city they call home.

Rodney Redes seems to be enjoying his new home. The 21-year-old Paraguayan winger has already endeared himself to the Verde fanbase, following his spirited preseason performances. His willingness to drive at defenders with pace, coupled with a wicked shot, saw him record goals and assists against USL and MLS competition. A slight knee injury against FC Dallas in the La Copita tournament makes him a doubt to start or perhaps even play any part in the season opener in LA. Once he does return, though, Redes has all the attacking attributes to truly have an impact during his debut MLS season.

Can Austin’s defense play out of the back?

First-year head coach Josh Wolff has a clear vision for how he wants his team to play, and it includes possession out of the back. On several occasions during preseason, Austin’s defense struggled to execute on that idea. As preseason progressed and players became more familiar with one another, the defense looked steadier.

Austin will start the season with Ben Sweat and Nick Lima at fullback. The duo has 200 MLS appearances between them. They will settle quickly. Matt Besler at the heart of the defense is going to be key to it all. He will likely be partnered up with either MLS debutant Colombian Jhohan Romaña, or the more seasoned Julio Casante, formerly of Portland Timbers. Both have had their wobbly moments in the build-up to the season, particularly against MLS competition. With 311 MLS appearances, it’ll be up to Besler to provide the calming influence that ensures Austin’s defense can execute Wolff’s plan.

They can and they have against MLS competition in Houston and Dallas. They may not have a singular attacking focal point in a traditional No. 9, but they would argue that they have something better; goals from all over the field. And in addition to goals from open play, they have a sniper of a free-kick taker in one of their Designated Players, Argentinian Tomás Pochettino. ‘Toto’ has already rifled in unstoppable freekicks against Houston Dynamo and San Antonio FC.

Probably not, but then again why not? LAFC has both the blessing and the curse of playing CCL. The additional opportunities CCL provides them to develop fitness and sharpness, also comes with the potential of injuries and a split focus. There is no denying LAFC’s attacking potency, but their defense has in previous seasons shown a tendency to buckle when countered quickly – something that Austin has already demonstrated an adeptness for. In a game that should probably only go one way, don’t be surprised if we see a wildly open contest that could go either way!

Expectations are low for any first-year team. But this well-constructed Austin FC roster, full of intention and purpose, is eager to deliver the kind of high-octane soccer that Josh Wolff is demanding. It won’t always work. But when it does, it could be glorious – and it will be enough to propel them to the playoffs. Just.