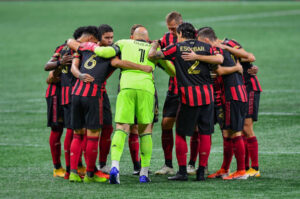 PREVIEW – The 2021 MLS season is upon us. For Atlanta United FC, so it the Round of 16 of the Concacaf Champions League. Gabriel Heinze is in as head coach. MVP caliber striker Josef Martinez is back from injury. With some new signings, the aspiring super club is getting back to a style of play and culture that helped them win MLS in 2018. Let’s take a look at all of this with an Atlanta United season preview.

Last year was rough for the Five Stripes. Martinez tour his ACL in the first game of the season. They crashed out of the MLS is Back tournament, ending Frank de Boer’s time as head coach. In an altered regular season format due to the pandemic, ATLUTD missed the MLS Cup Playoffs for the first time in their history.

Erik Lopez might have one of the most interesting paths to making his MLS debuts. Signed last summer, he wasn’t eligible to play for the first team due to registration deadline issues. He went on loan to the Atlanta United 2 and is now with the MLS club in preseason. He’s another young South American attacker in MLS who could complement Josef Martinez well.

The other two key arrivals I lump together because of their similarities to each other and the players they could be replacing. Eric Remedi was traded to San Jose Earthquakes and veteran Jeff Larentowicz left the club out of contract. Those are two big central midfield pieces gone. They covered a lot of ground, participated in linkup play, and (Larentowicz especially) organized the team defensively.

Sosa and Ibarra are both young midfielders with not a lot of first team playing time. Given the departures mentioned above, one or both of these new Argentinians could play critical roles for Heinze. This will be specially true if he goes with his 3-4-3 or 4-1-4-1 with pressing and his buildup system. If they don’t make another big signing at center back, these two could be what makes or breaks the season defensively.

Lastly, I’ve been hearing about George Bello from Atlanta fans for years. The 19-year-old finally broke into the first team last year. With the only other natural left back on the squad being Mikey Ambrose, is this the year Bello becomes an impact starter and gets into the youth national team conversation?

How good will the Alan Franco and the backline play?

Atlanta United Twitter has been on a roller coaster the last two months with all the center back rumors. That’s finally ended it seems with Alan Franco signing with the club, after having COVID. The club struggled defensively last year with the departure of Leandro Gonzalez Pirez. Miles Robinson is great and still only 24-years-old. They’re decent at fullback with Anton Walkes and Brooks Lennon on the right and Bello on the left.

Alex DeJohn wasn’t a starter at Orlando City and Homegrown George Campbell is unproven. Their two best defensive midfielders have left the club. Heinze needs to sure things up at the back. Franco (or any other center back signings) has to be a big part of that as Robinson’s partner in the middle. So should one of Sosa or Ibarra playing well in front of the backline as a No. 6.

Can they reestablish their identity and in that become contenders again?

Frank de Bour was really Fran de Bust as a hire for this club. With different ideas about the game, adjusting to MLS, and a language barrier in the locker room, he just couldn’t get everyone on the same page. Atlanta’s getting back to what made them successful in their first two years under Tata Martino.

Heinze and many of he new player signings are South American. They’ve still got a decent group of domestic players, especially at the back. Marcelino Moreno is coming into his first full season in MLS as the replacement for Pity Martinez.

Even if they don’t win CCL, will those games prove to be instructive for Heinze implementing his tactical ideas and style of play on the team? Will the fixture congestion against a LMX team prove exhausting or will all the games help everyone get up to speed faster? Can Josef get back to MVP scoring levels? Can Heinze get the team playing well offensively and defensively? If they can, this team should return to the upper echelon of the Eastern Conference.

Can Marcelino Moreno (or someone else?) be The Guy?

Atlanta’s yet to replace Miguel Almiron as Martinez’s partner in crime. Ezequiel Barco’s had some good moments but hasn’t lived up to the $15 million transfer fee. He took sometime getting settled and has had some injuries. Pity Martinez never lived up to expectation and Atlanta were lucky to sell him for more than they bought him for last fall.

They’re a playoff team again with a healthy Josef Martinez and Heinze creating a good mentality. Almiron level production out of a No. 10 or several players is the difference that would make them an MLS Cup contender, possibly a favorite. Moreno’s the obvious choice as the new DP signing in the prime of his career. If Barco can reach his 2019 best and stay healthy, it could be him. Someone, possibly multiple people, need to provide a secondary chance creation and scoring option for this team to lift trophies again.

If Josef Martinez is healthy for the entire year, this team should comfortably make the playoffs. It could take sometime for them to gel, so I don’t see Atlanta winning the Supporters’ Shield this year. They will finish in the top four in the Eastern Conference and contend for but not make it to MLS Cup.