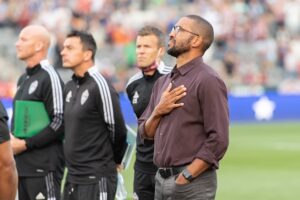 SAINT PAUL – Minnesota United FC hosted Colorado Rapids in a Sunday afternoon game. Both teams got relief midweek with Lucas Esteves and Emanuel Reynoso both having their red card in the previous game rescinded by the MLS Disciplinary Committee.

The Loons got on the board just eight minutes into the match. Reynoso delivered a good ball into space to Franco Fragapane. The Argentinian rounded Keegan Rosenberry and found Adrien Hunou in space. The striker took a touch then threaded his shot through traffic into the far bottom corner.

Ethan Finlay had the best chance of the first half for the home side after that. Off a throw in, he volleyed the ball from close range but goalkeeper William Yarbrough made the save.

Colorado settled down after that, despite of the game state. Their best chances came in the final minute of the half. Younes Namli cut inside and shot from the top of the box for the far corner. Goalkeeper Tyler Miller made the save. Eventually the ball got recycled to Jack Price who shot for the same corner but was denied.

Minnesota put Colorado under the cosh to start the second half. Yarbrough and the center backs had to make several emergency defending plays. The best of which came in the 50th minute when Yarbrough intercepted a cross from Finlay off his line to prevent Fragapane from scoring into an open goal.

Things went from bad to worse for Colorado seven minutes later. In transition, Danny Wilson tugged then tripped up Hunou from behind with no defender between him and the goal. He was sent off for DOGSO.

Colorado battled back. They got life in the 72nd minute when VAR called a penalty on Miller for taking down Michael Barrios in the box. Cole Bassett stepped up and buried it top corner. It was his first goal since mid July.

The Loons went for a winner after that, exposing themselves on the counter. Winning the ball, Rosenberry got the ball forward to Lewis who squared it to Barrios for a tap in.

The match ended 3-1 with Lucas Esteves dribbling the ball into the net in stoppage time on a counter with Miller off his line.

#Rapids96 take the lead with a man down, from a goal down!

Michael Barrios finishes off the attack nicely and just like that it’s 2-1 in Minnesota. pic.twitter.com/P4hM5AVC9G

Cole Bassett makes it 1-1 from the penalty spot!

A strong finish to bring 10-men @ColoradoRapids level in the second half. pic.twitter.com/Ws87m1TywE

Keep Fighting: The Rapids found another way to win in the face of adversity.

More dropped points at home: The Loons have struggled this year at home up a man. They were the superior team in the second half but the penalty call stung them and they never recovered with the pressure on to see the game out.

Goal Bassett: Cole Bassett converted his first penalty taken at the first team level. It was his first goal since July and his fourth of the year.