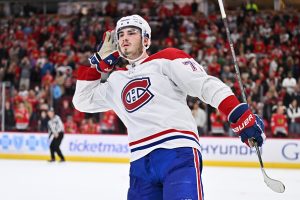 One team that has undergone a slew of changes is the 2022-23 Montreal Canadiens. Out the door went, Marc Bergevin and Dominique Ducharme were fired midway through last season. Kent Hughes and Jeff Gorton are tasked with bringing the Canadiens back to glory, and one of the smartest moves they made was hiring Martin St Louis as the head coach. This team is littered with youthful talent, highlighted by captain Nick Suzuki and Cole Caufield. One addition that has impacted the club, and the player is Montreal Canadiens forward Kirby Dach.

During the summer, the Chicago Blackhawks traded Kirby Dach to the Canadiens for the 13th overall pick in the 2022 NHL Draft, and pick number 66. Dach was initially selected third overall by the Blackhawks behind New Jersey Devils centre Jack Hughes and New York Rangers winger Kappo Kakko. After underperforming in Chicago, they felt it was best to move on. Montreal is reaping the benefits as he has transformed his game and looks completely different.

Days In The Windy City

A lot of expectations are upon you when you are selected high in the draft. It comes with the territory. Not every high pick turns into Connor McDavid or Auston Matthews, but that is okay. But for Dach, things did not get off to the right start in Chicago.

In three seasons with the Blackhawks, he amassed 19 goals, 40 assists, and 59 points. He has never hit the ten-goal mark in his short career. However, last season he did have a career year across the board (nine goals, 17 assists, and 26 points). Wildly enough, this was seventh best on the Blackhawks. Dach won a measly 32.8% of his faceoffs and finished with a Corsi For Percentage (49%).

Last season Dach spent over 150 minutes with star wingers Alex DeBrincat (78 points last year) and Patrick Kane (92 points last year). For his production to be that low playing alongside those two is a true statement. As a line, they had the team’s worst expected goals percentage (42%) and averaged a poor expected goals for per 60 minutes (1.93). However, the line did account for nine goals together, so that’s something.

Fast forward to this season and Montreal Canadiens forward Kirby Dach is thriving. He has four goals, 13 assists, and 17 points which is good for third on the team. All of last year he had 26 points, and only two months into this season he is close to eclipsing that total. It took him three months to score five goals and he already has four in two months this season. His faceoff win percentage is down still (38.5%), but he has been playing the winger position. What’s eye-popping is he is now averaging 2.89 points per 60 minutes this year compared to 1.24 last year. The kid has been set up for success and it has worked in Montreal.

Yes, it is referred to as that in New York, but it’s an actual thing in Montreal as well. The most significant success for Montreal has been the line of Caufield, Suzuki, and Dach. Together they have played 14 games and 157 minutes. This trio had a goals percentage of 56.5% and have 13 goals as a line. They average 4.96 goals per 60 minutes. The production has been there for all three, as they all are top three on the Canadiens in points.

As a line, they are controlling possession. Together they have a Corsi For Percentage (54%) and they have generated 155 shot attempts. They have six high-danger goals and spend most of their time in the offensive zone. Since making the adjustment to put the three together, it had paid dividends for the Habs as they rank 10th in even-strength goals (46).

All Statistics Came From Money Puck

Props To The Head Coach

Granted, the players are doing their jobs, but props need to go to the head coach. Martin St Louis has been an excellent hire for this club, and the best part is that they are winning. Not only do we see St Louis develop Dach, but we saw this last year with Cole Caufield.

Under Ducharme Caufield was struggling. Before the initial firing in the middle of February, Caufield had only scored five goals. Once St Louis came in, Caufield was one of the best players in the game to finish the year. He went on to score 18 goals and finished with 43 points. He had eight points by the end of January.

It’s encouraging, given that this is a young team, and the head coach has a way of working with the young guys. It’s bright days in Montreal, and it starts behind the bench.

Montreal Canadiens Kirby Dach is enjoying life in his new home. Not only is he producing, but he is having fun playing. And the best part is he is locked on for the next four seasons carrying a cap hit of $3.3 million per season. Montreal is building something special and Dach is part of it. Even though Montreal is rebuilding, this is much better than what Chicago is going to go through.

The post The Resurgence Of Kirby Dach appeared first on Last Word On Hockey.