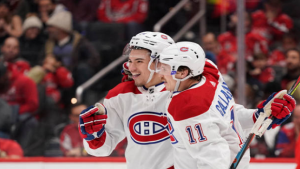 With Shea Weber officially out of the picture, it is time for the most storied franchise in hockey to choose its next captain.

The Next Montreal Canadiens Captain

The management group has several routes they can take. They can choose a veteran to be the heart and soul of the team. They can choose a young player to grow into the role. Finally, they can equally give the “C” to a player that nobody would expect. There are many options for the next Montreal Canadiens captain.

There is a lot of irony in naming Nick Suzuki captain. In the trade that sent former captain Max Pacioretty to the Vegas Golden Knights, then GM Marc Bergevin was targeting 2017 6th overall pick Cody Glass. When Vegas wouldn’t agree to the deal, Suzuki was the consolation prize. The Canadiens equally sent captain Shea Weber to the Vegas Golden Knights in June, all be it in a salary cap move. Now having completed three full seasons in bleu-blanc-rouge, Suzuki has established himself as a first-line center, and as part of the young core in Montreal.
Embed from Getty Imageswindow.gie=window.gie||function(c){(gie.q=gie.q||[]).push(c)};gie(function(){gie.widgets.load({id:’s7jPt_5pQCJcI1wmQN2Wbg’,sig:’EoPE4rFWC7_wv7k80ps1X7wXKjJTcC3OR-knb9U1Cjs=’,w:’594px’,h:’396px’,items:’1239398200′,caption: true ,tld:’com’,is360: false })});

The eight-year, $63-million extension he signed last off-season will kick in this year, and he is the Hab locked up for the longest term. Only turning 23 this week, Montreal has Suzuki under contract for the entire prime of his career. If he continues to improve, his big contract should age well, and he will continue to cement himself as a key piece for Montreal.

Suzuki has proved himself equally to be a fan-favourite. He spent the summer in Montreal and was the main focus of off-season publicity for the Habs.

Although he grew up a Toronto Maple Leafs fan, he has made a Habs face turn and now roots against his childhood team. He even admitted to cheering for Tampa Bay (who ended Montreal’s hope at the Stanley Cup in the 2021 Finals), when they went up against Toronto in the first round this year.

Integrating himself so deeply into the Montreal culture and community makes him a clear front runner to be the captain, and the organization publicizing him so much could be a sign of a move to come.

Drafted 13th overall in 2017 by the Vegas Golden Knights, Suzuki was traded to the Habs alongside forward Tomas Tatar and a 2nd-round pick. In three seasons in Montreal, Suzuki has played 209 games, earning 49 goals and 94 assists for 143 points. He reached new highs during the tough 2021-22 season, with career highs in goals (21), assists (40), and points (61).  Under Martin St-Louis, Suzuki was nearly a point-per-game, and his upside is truly tantalizing.

The case for Suzuki:

The case against Suzuki:

The longest-tenured skater on the Habs roster, Gallagher has been a fan-favourite since he put on the jersey for the first time in January 2013. The gritty, undersized forward has been the beating heart of this team for years and signed a six-year extension that kicked in last season. “Gally” was a key piece in the cup finals team from 2020-21, and no matter what letter ends up on his jersey, he will always be a leader in the locker room, and in the community. His all-effort style of play has endeared himself to the fanbase. Still, Gallagher does have a, putting it mildly, questionable relationship with the officials. A team captain needs to command the respect of the officials and there definitely is a strained relationship there. There is also his contract situation. The extension he signed carries a large cap hit. With his play (seemingly) falling off, his contract might be one the Habs are looking to move.
Embed from Getty Imageswindow.gie=window.gie||function(c){(gie.q=gie.q||[]).push(c)};gie(function(){gie.widgets.load({id:’S8FS1vx5SCp7f0lLK8jR0w’,sig:’mX1Rjjyuh7c2gXF3h9_kTXc0aoTkbE6T5XCN35sa0_E=’,w:’594px’,h:’396px’,items:’1240231228′,caption: true ,tld:’com’,is360: false })});

In 638 games with the Habs, Gallagher has put up 194 goals and 187 assists for 381 points. He has equally had 397 penalty minutes. Points don’t tell the whole picture for Gallagher, his high-octane physical game has become a rarity in the league. Unfortunately, Gallagher had an incredibly rough season in 2021-22, with only 7 goals, 17 assists and 24 points. To be captain of the Montreal Canadiens, a player needs to be more than just a role model, however, this season might have been a fluke. He shot only 4.9% this past season, just over half of his career percentage of 9.7%. He equally was among the players most affected by former coach Dominique Ducharme’s system and did show some improvement under Martin St-Louis.

The case for Gallagher:

The case against Gallagher:

He might not be the most exciting option, but Joel Edmundson deserves to have his name in this conversation. The 29-year-old could be a stop-gap solution if management deems Nick Suzuki not to be ready, and he is well-respected in the locker room. One thing Edmonson also has over this teammate is his championship pedigree. He was a key member of the 2019 St. Louis Blues Stanley Cup championship team. Depending on what the Habs management core values, his Stanley Cup experience could carry a lot of weight when making the decision.

Joel Edmundson’s time in Montreal hasn’t been the most stable. Coming in for the 2019-20 season, the defender has gone through a pandemic-shortened year and one where he was sidelined with injury for most of the season. In 79 games as a Hab, he has made a statement as a dependable player in all situations. His 19 points and 60 PIMs are complemented by a stellar +27 rating.
Embed from Getty Imageswindow.gie=window.gie||function(c){(gie.q=gie.q||[]).push(c)};gie(function(){gie.widgets.load({id:’JS-SQfAVSUxVzLYY7OSr_Q’,sig:’-4xPPKO1bGxNSsy9sBi8DqB7CXCmykIGDaNb7OQwMj8=’,w:’594px’,h:’414px’,items:’1326835771′,caption: true ,tld:’com’,is360: false })});

The case for Edmundson:

The case against Edmundson:

Habs Need to Pick Their Captain

With so many options on the table, including waiting another year to name a permanent captain, management has a tough decision to make. If I were to be making the choice, I would undoubtedly choose Nick Suzuki, as I believe he will be the face of a franchise for the better part of the next decade – however, after being passed on in 2018, Gallagher more than deserves the title as well. Hopefully, the next Montreal Canadiens captain will be named soon, and the debate will end.

The post The Next Captain of the Montreal Canadiens appeared first on Last Word On Hockey.