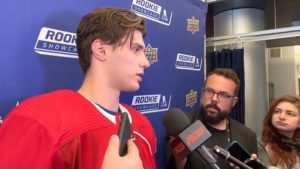 Last season we saw something that hasn’t happened in the NHL in over a decade, as Buffalo Sabres first overall draft pick in 2021, Owen Power, didn’t start the season with the big club but rather spent another season with Michigan at the collegiate level.  It’s rare to see a first-overall pick not play in NHL in their draft plus one year. But with the Sabres being a bottom dweller last year, they opted to give the defenseman another year of seasoning.

This leads us into this year as 2022 first overall draft pick Juraj Slafkovsky prepares for training camp with the Montreal Canadiens. The consensus is that Slafkovsky is NHL-ready and will likely spend the season with the Canadiens. He may even slot onto the top line with budding superstars Nick Suzuki and Cole Caufield.  However, would it be more beneficial for the Canadiens to take the Sabres’ approach with their young prospect or should the Montreal Canadiens start Juraj Slafkovsky?

Some of the NHL’s top prospects took part in the NHLPA’s rookie showcase on Tuesday, including Montreal’s Juraj Slafkovský and Seattle’s Shane Wright.

Both spoke about their goals to make their #NHL rosters this season: https://t.co/x1euqnus43#TSNHockey pic.twitter.com/prJsWztZna

Slafkovsky may benefit more from getting some seasoning in the AHL with the Laval Rocket rather than immediately thrusting him into the NHL. The Rocket have a strong young team and adding a first overall pick to the mix would certainly be a welcome addition. Starting in the AHL would also give Slafkovsky some time to adjust to North American life and hockey without having to immediately face NHL-level competition and be in the spotlight of Montreal.

If he excels in Laval, the Canadiens can also choose to recall him mid-season if they feel he’s ready for it, much as they did with Cole Caufield this past season – which proved beneficial for the youngster. Many might see the AHL route as a setback for Slafkovsky but in reality, there is no reason to rush him into the NHL next season. The Canadiens may do well to decide to send Juraj Slafkovsky to the AHL to season his game.

If he proves he’s ready at training camp then we could see the Canadiens start Juraj Slafkovsky in the NHL, at least to get his feet wet at the NHL level. However, the Canadiens want to avoid making the mistake they made a few years ago when they threw third overall pick Jesperi Kotkaniemi into the fold at just 18 years old before he was ready. If after nine games it becomes apparent he’s not ready, the Habs can still send him back to Laval and avoid burning the first year of his entry-level contract.

Slafkovsky’s game could shine under the new coaching regime of Martin St. Louis. This past season, we saw many of the team’s youngsters improve their play once St. Louis took over. Playing against men this year would be nothing new for the young Slovak. He spent this past season with TPS Turku in the Finnish Liiga. Slafkovsky also played in the Olympics for Slovakia, where he posted seven goals in as many games on his way to collecting MVP honours after leading his home country to its first-ever bronze medal.

The Canadiens ultimately signed Slafkovsky to a max ELC earlier this offseason with the intention of bringing him to North America for this season. With a solid training camp, Juraj Slafkovsky will at least get the nine-game maximum (before the first year of his ELC is burned) to start the year. With the Canadiens not expected to contend for a playoff spot this season, there is no reason to rush their young prospect and risk hurting his development.

Fans definitely want to see Slafkovsky in the NHL sooner rather than later. However, the Canadiens have time to afford to allow Slafkovsky to groom his game in Laval if they feel the need to do so.