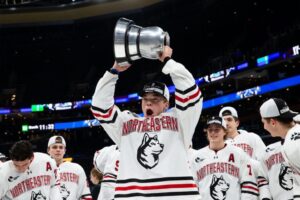 The Northeastern Huskies season came to an end with a 2-1 overtime loss to Western Michigan in the first round of the NCAA Frozen Four Tournament. The end of the season also means the end of the college career of Jordan Harris, the Montreal Canadiens third round pick in the 2017 NHL Draft. Reports have also emerged that Harris will soon sign a two-year entry-level contract with the team. Harris is also likely to play some games for the Habs, allowing him to burn the first year of that deal.

Do it with the proper respect: What a great game between Western Michigan/Northeastern, with the former winning in OT. In the aftermath, hearing Jordan Harris will sign two-year ELC with MON. Dont be surprised if he’s in lineup this season to burn first year.

Jordan Harris to Sign ELC with the Montreal Canadiens

Harris, 21, put up five goals and 15 assists for 20 points in 38 games for the Huskies this season. Over his four-year NCAA career, he has scored 15 goals and 58 assists for 73 points in 129 career games. Harris was named the best defensive defenceman in Hockey East this year, as well as being named to the conference All-Star team, and winning the conference championship with the Huskies. He was the 71st overall pick in the 2017 Draft.

Harris was fourth on our latest list of top Montreal Prospects which was released in October. His report states, “Harris is another excellent skater. He seems to almost glide on the ice with a textbook stride. His strong skating is the basis of his excellent two-way game. Harris has a very good first step and good acceleration in both directions. His top-end speed is also very good. This allows Harris to play an offensive game and still get back in the defensive end of the ice. His agility and edgework help Harris to maintain good gap control in the defensive end and also help him to make offensive plays. Harris also has good pivots, and transitions from offence to defence quickly. Harris is slightly undersized and could add a bit more muscle to his frame to play physical at the pro level but does a good job on the boards and clearing the front of the net in college hockey.”

LRTs- it’s expected that Jordan Harris will sign his entry-level contract with Montreal in short order.

Jordan leaves Northeastern hockey in a better place than when he arrived. Thank you @jharris004 for your heart and passion for 4 years. Can’t wait to watch you in the show. pic.twitter.com/Ap226Kpjny