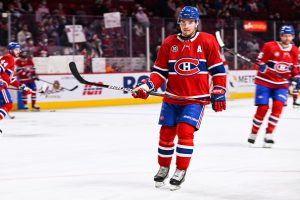 The Montreal Canadiens seem to be headed in the right direction under the new regime. Nabbing Juraj Slafkovsky at this year’s draft and naming Martin St. Louis as the head coach was a great decision. Kent Hughes and Jeff Gorton appear to be righting the ship in Montreal. With the youthful core that is in place, another big move came through. Nick Suzuki is the new captain of the Montreal Canadiens.

Nick Suzuki is the new captain of the team. After previously being served by Shea Weber, he becomes the 31st captain in team history. While serving as the assistant captain last season, he becomes the youngest captain in team history at age 23. It is an honour to wear the C for this proud franchise. Brendan Gallagher and Joel Edmundson will serve as the alternate captains. And after signing an eight-year extension in 2021, it’s his time.

Since being acquired in a trade back in 2018 with the Vegas Golden Knights, he has been nothing but good since arriving. After consistently hitting 41 points the first two seasons, he broke out this year having a career year. He set career highs in goals (21), assists (40), and points (61). In his young career, he has 49 goals and 94 assists and 143 points. Suzuki was on the all-rookie team in 2019.

The future is bright and Nick Suzuki is the captain. Montreal may not be a playoff team, but they are doing the right things. They showed potential under St. Louis to conclude the year. It is exciting times in Montreal as one of the most iconic franchises aims to be better. A young core of Caufield, Suzuki, Gallagher, and Slafkovsky when he comes is special. This is an excellent move by the Canadiens and a special honour for the young kid.