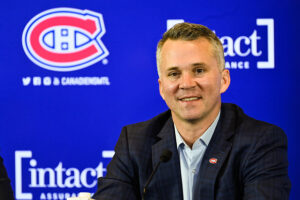 Welcome back to another edition of NHL Rumours from the crew at Last Word On Hockey. The 2021-22 season is coming to an end and teams are gearing up to make a run at hockey’s holy grail. While contending teams are still locked in on the current season, teams not in the mix are looking toward next season. With that, rumours are starting to swirl. In today’s NHL Rumours segment, we focus on rumours surrounding the Montreal Canadiens, Toronto Maple Leafs and the New York Rangers.

All NHL Rumours come from their original source and are subject to change.

Rumour: In the most recent edition of TSN’s Insider Trading, Darren Dreger mentions that while Habs General Manager Kent Hughes is eager to remove the Interim tag off of current head coach Martin St. Louis, there have not been any discussions on doing so at this point.

Analysis: Dreger states that both parties agreed to wait until the end of the season before discussing any future plans. Dreger mentions that St. Louis does have a young family, so nothing is for sure, however, it would be shocking if St. Louis didn’t stick around as the Head Coach of the Canadiens. St. Louis has been a breath of fresh air for the Canadiens and has completely turned the team around since taking over for former head coach Dominic Ducharme. He currently has an 11-10-4 record since taking over the helm, which is respectable considering the club was 8-30-7 under Ducharme.

St. Louis has shown trust in his young players, including recently acquired defenceman Justin Barron, who St. Louis has even started in multiple 3-on-3 overtime sessions. Which is a tall ask for the youngster who was drafted 25th overall in the 2020 NHL Entry Draft and only had two games of NHL experience prior to coming to Montreal. Barron has now picked up his first NHL goal, scoring last night against the Ottawa Senators, and has added an assist in five games with the Canadiens.

However, the happiest player on the Canadiens roster since St. Louis took over is rookie Cole Caufield. Caufield struggled mightily under Ducharme only registering one goal and eight points in 30 games. Since the arrival of St. Louis, Caufield has caught fire, scoring 15 goals and 27 points. It has Habs fans wondering if Ducharme single-handedly robbed Caufield of a Calder Trophy this year. That’s a question we will never know the answer to. However, what we do know, is that St. Louis has found success early in his tenure as the Habs’ Head Coach. He’s well respected by the players and his peers and all signs point to him sticking around in Montreal.

Rumour: Also from Insider Trading, Darren Dreger states that he is expecting Leafs’ prospect Matthew Knies to return to the University of Minnesota for another year of college hockey.

Analysis: Knies will be competing in the National semi-finals on April 7th against Minnesota State. It is expected the Knies and the Maple Leafs will have conversations immediately after the tournament and will decide if he will turn pro or return for another season of College Hockey. Dreger did appear on Leafs Breakfast and originally stated that it seemed like Knies wanted to make the jump to the NHL. However, now it seems he’s backtracking on that statement.

Knies has been lights out for the University of Minnesota this season, scoring 14 goals and 18 assists for 32 points in 32 games. He also represented Team USA at the Winter Olympics in Beijing where he registered a goal and an assist in four games. Knies has the size NHL front offices salivate over, standing at 6-foot-3 and weighing 210 lbs at just 19-years-old.

This size and the skill level he possesses has him ready to play at the NHL level. He is regarded as one of, if not the top prospect for the Maple Leafs at this time. Knies was drafted in the second round, 57th overall in the 2021 NHL Entry Draft. He is a player that Leaf fans should certainly be getting excited about as he inches closer to donning the blue and white. We should know when that will be within the next week.

Rumour: In a recent article by Mollie Walker of the New York Post, she mentions the possibility of the Rangers targeting Mark Scheifele if they let Ryan Strome walk in free agency.

Analysis: While there haven’t been any signs of Scheifele wanting out of Winnipeg, this would certainly be a blockbuster if it happened. Scheifele has produced at least a point-per-game season each year for the last six years, including this season. While he may not be the most defensive-minded player around, there is no denying his talent. Scheifele would certainly be an upgrade over Strome. With a cap hit of just $6.125 for the next two seasons, it’s certainly a contract the Rangers could fit into their cap. The thoughts of Scheifele playing next to Artemi Panarin would certainly be exciting.

The issue, however, would be the cost to acquire his services. The Jets are not just going to give him away. They’re also not at the point where they’re looking to rebuild. Scheifele is likely still very much in the plans for Kevin Cheveldayoff and the Winnipeg Jets. It would cost the Rangers quite a bit to pry him away from the Jets. While the deal is less than likely, it is something to keep an eye on in the offseason.