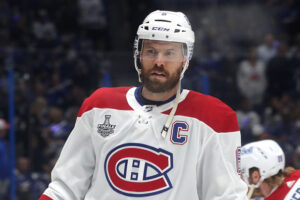 We’re just mere days away from the trade deadline and the NHL rumours are flying. There’s plenty of NHL rumours to go around with teams trying to put themselves in the best position. However, some are looking to contend while others are clearing out space. Today’s NHL rumours focus on the Montreal Canadiens, Seattle Kraken and St. Louis Blues.

All NHL rumours come from the original source and are subject to change.

Hughes says the Canadiens are pursuing cap flexibility in response to a question about trading Shea Weber. Adds he won’t get specific on how they might do it.

Analysis: Weber has likely played his last game in the NHL after leaving it all on the ice. The veteran helped power the Habs to their first Stanley Cup Final since 1993. However, his body took a lot of damage during that run.

His contract is also a large one with a cap hit of nearly $8 million that runs until the end of the 2025-26 season. The deal is effectively buried on long-term injured reserve. However, Montreal would like to get the contract off the books, so it can move on.

There are teams like the Arizona Coyotes, Seattle Kraken and Buffalo Sabres that could be willing to take on that deal in return for a sweetener. Salary retention has been part of some deals at the deadline and this would be no different. Weber can join the pantheon of Coyotes’ legends like Chris Pronger and Pavel Datsyuk that were technically on the team.

Rumour: Ryan S. Clark of The Athletic reports that the expansion team may not be done making moves after moving Calle Jarnkrok.

Trading Calle Jarnkrok for the needed draft capital to build a potentially stronger future is the start of what could be a busy next five days for the Kraken. #SeaKraken https://t.co/af2kO7e6fs

Analysis: The trade of Jarnkrok could be a harbinger of things for the first-year team. Captain Mark Giordano will likely to be dealt to a contender as well, but there may be other names heading out the door.

The Kraken didn’t go nuts and spend a lot of money in the expansion draft. Someone like a Carson Soucy could be on a team’s radar for some defensive depth. General Manger Ron Francis would be smart to listen to offers on plenty of players. The team is taking the traditional expansion approach in not trying to risk it all like the Vegas Golden Knights did.

It’s not all doom and gloom for Seattle as Matthew Beniers will likely be part of the team next season. The Kraken will also a high draft pick this season and could land Shane Wright if the ping pong balls fall the right way. However, the next few days will be busy for the Seattle front office.

Rumour: The Athletic’s Jeremy Rutherford speculated on 11 trade targets for the Blues.

Finding the right trade match for the Blues defense: How 11 potential targets could fit in, and what the price could be https://t.co/JUHlMg7Lyx #stlblues

Analysis: Rutherford stresses that a few of those names are out of reach like Jacob Chychrun, Hampus Lindholm and Ivan Provorov. Targets like Giordano and Justin Braun could be good, but the asking price could be too rich for Blues General Manager Doug Armstrong.

The focus shifts to affordable targets like Soucy, Nick Leddy, Jacob Middleton and Brenden Dillon. All of these players would fill the team’s need for a physical defenceman. Soucy is a player does have a few offensive parts of his game. He’s tied with former St. Louis defender Vince Dunn in goals with seven.

Leddy has plenty of playoff experience despite not being a puck-mover or a classical lockdown blueliner. Detroit gave up a second-rounder and would likely want a similar return. The Red Wings may also retain some salary to sweeten the deal.

Middleton would be a good trade chip for the Sharks, who have depth in their pipeline. Dillon is a player that will likely need to be moved at some point by Winnipeg. The focus is on Andrew Copp and Paul Stastny, but Dillon would be a quietly good pick up for a team.