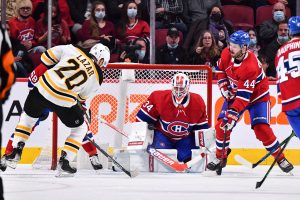 Welcome back to another NHL Rumours piece. Each day, we bring you the latest happening around the NHL. Today, we look at the rumour that Montreal Canadiens goalie Jake Allen may be in contract discussion with the team. Kevin Weekes of ESPN reports that he is hearing the two sides have started discussing a multi-year extension.

This is an interesting piece of news as Jake Allen was a name many thought could even have been on the trade block this year. Nothing against Allen himself. In fact, his steady play would be the reason the connection was made. Allen is now 32 years old and with the Canadiens looking to get younger and rebuild, some wondered if he would be a trade piece. Allen is in the last year of his contract and is a very reliable backup goalie. He can even play as a tandem guy when needed but would provide excellent depth for any team looking to make a playoff push.

Instead, it may appear as if the Canadiens want to keep him around. With Carey Price and his career in question, it makes sense. The Habs just locked up youngster Cayden Primeau in net, but don’t want to rush him into a job he isn’t ready for. Especially behind a young and rebuilding team, defensive mistakes may be plentiful. That is where Allen can come in.

Allen would be the perfect stop-gap for the Canadiens in bridging now into the future. And at just 32, even if they sign him to a 3-year deal, he should be able to be a backup to Primeau when he is ready to take the reigns fully. It will be interesting to see what terms would look like on a new Allen deal. His stats haven’t been overwhelming but the Habs have used him in some tough spots over the past few seasons.

One thing is for sure, if there is no trade market for the Montreal Canadiens goalie, don’t look for them to get rid of him for nothing. He will remain a valuable asset to the team regardless.