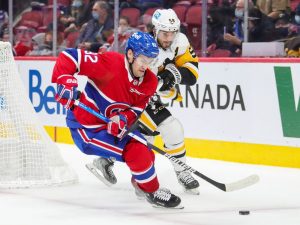 Jonathan Drouin has been strangely absent from the Montreal Canadiens roster as of recently. There finally is a reason why, alongside how he has been doing during this time.

According to Darren Dreger on TSN’s Insider Trading, Jonathan Drouin has been dealing with a flu throughout training camp. This goes alongside other health issues.

He is also working with the Canadiens to fit in with their plan for him. They want him to be completely healthy by the trade deadline. This is so that way they have the possibility of moving him.

Although this is a small health issue to start the season. This is one of plenty of examples where Drouin was sidelined for multiple weeks with an injury, or other off ice issue. It would make sense for the Canadiens to trade him, especially while he still has some form of value.

Having this injury is better for the Canadiens them having it close to the deadline, as now Kent Hughes and the front office staff can plan around it accordingly.

As mentioned earlier, Drouin hasn’t spent as much time on the ice as they would like. It’s assumed that the Canadiens would want a more consistent and effective top six forward, whoever that may be.

As of now however, the Canadiens have been bitten by the injury bug early, and already have had a few skaters go down recently. Although Drouin is taking time to heal and plan with the Canadiens, they are most likely anticipating the time when he can be cleared to return to action.