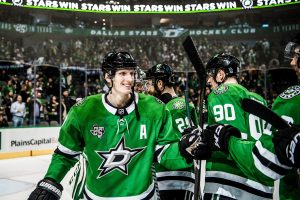 The Montreal Canadiens planned to sign Klingberg and then immediately flip him to the Edmonton Oilers. That trade included salary retention to reduce Klingberg’s cap hit in Edmonton. In return, the Habs would have received an asset to push the deal through. That asset, though, wasn’t named (or perhaps, never came to fruition as Klingberg wound up in Anaheim).

Obviously, Klingberg signed a one-year deal with the Ducks instead. Perhaps the delay in that contract, though, came partly from the Oilers and Habs talks. Rumours suggest that Klingberg may have received a longer deal if he inked with Montreal. Or, at the very least, he could’ve started the year on a team closer to Cup contention in Edmonton.

At the end of the day, the one-year contract Klingberg signed likely means he’s a rental candidate this season. The Ducks signed him with full intentions to flip him by the trade deadline. Or, at least, that much is inferred.

And based on this rumour, Edmonton jumps to the top of the list for Klingberg’s potential mid-season destinations. If Montreal wanted to make this move to flip him to the Oilers, the Ducks might too. Especially if Edmonton offers enough, which seems very plausible now. If they were already willing to move assets for the defenceman this summer, when they could have signed him off the market directly, odds are, they’ll still be willing. In fact, their willingness might increase slowly but surely as the trade deadline approaches.

The Canadiens come out unscathed in all of this, though disappointed. They don’t anticipate fielding a competitive team next season. Inking a short-term deal, eating part of that salary, and receiving a pick or prospect in return amounts to a win for them. Instead, Klingberg fired his agent, hired a new one, and signed in Anaheim, all in a 24-hour period. Clearly fed up with waiting, Klingberg acted fast once he changed agents. Montreal didn’t lose anything technically, just missed an opportunity at a “free” win. “Free” doesn’t mean without cost (they would’ve paid part of Klingberg’s salary). But it does mean gaining an asset in exchange for nothing in their system today. All picks, prospects and roster players stay put.

What this Suggests Going Forward

One way or another, don’t expect to see Klingberg, 30, wrap this season with the Ducks. He comes off a particularly unproductive season by his own standards. That being said, he still posted 47 points from the blue line, including 41 assists. He owns 374 points in 552 career games, a well-known offensive defenceman that makes any team better around him. His 7.1% Corsi-for last year stood out on Dallas’ blueline as well.

John Klingberg is now only the second defenseman in Dallas Stars history to record 50 assists in a season. The other is Sergei Zubov. #GoStars pic.twitter.com/R9l1E1hFgD