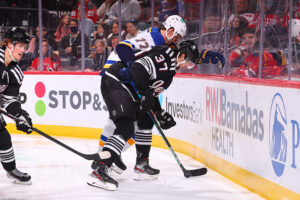 Welcome to the Tuesday article of NHL rumours. We’re under one week away from the NHL Trade Deadline and teams are going to have to make some decisions on what they need to do. Deals may have been slow to come. However, the talk is starting to pick up now as we get closer. Today’s NHL rumours focus on the Montreal Canadiens, Colorado Avalanche, and Dallas Stars.

Rumour: We start off with Sportsnet’s Elliotte Friedman stating on the Jeff Marek show that the Montreal Canadiens are one of the teams in on Pavel Zacha this deadline.

Friedman on The Jeff Marek Show says Montreal is one of the teams in on Pavel Zacha as well. #GoHabsGo #NJDevils

Analysis: This wouldn’t be your typical deadline “buy” as Montreal is in dead last currently. However, when you look further into it the deal starts to make more sense. Zacha just hasn’t worked for New Jersey and has been part of the reason the rebuild has taken so long. Obviously, it’s not all on him. But Zacha is one of a few picks that the Devils just didn’t take full advantage of. Zacha was taken 6th overall in the 2o15 NHL Draft. He hasn’t produced well enough for any pick that high but it’s made worse by looking at the elite names that went later.

For Montreal, they see a 24-year-old who had a pedigree and may still work out. Maybe a change of scenery gets him closer to the player the Devils thought they were getting. At that age, if he is a cheap player to acquire, why not go for it? If he works out he can be a part of your long-term plan. If not, no worries. The Habs are also flushed with assets to use and will only get more this deadline.

They’re not giving up a major pick but if New Jersey asks for one of the three third-rounders they have this year, maybe Montreal thinks about it. They also have two-fourths and again, will likely sell more assets at the deadline. There could be a fit for both sides here. Zacha is having an OK season, on pace for 41 points. Montreal would be hoping to get that player and maybe even improve him.

Rumour: TSN’s Pierre LeBrun is reporting that the Colorado Avalanche are not done. They still may be in play for Claude Giroux despite the trade they made yesterday.

My sense is the Colorado Avalanche don’t intend to be done. They still hope to further improve the roster. Believe they’re still interested in Claude Giroux among other forwards…@TSNHockey @TheAthletic

Analysis: This is an interesting one to see. Naming Giroux specifically is the biggest thing that will be interesting to watch because the Avs don’t have a ton of cap room. Josh Manson being half retained certainly helped but they would almost certainly need a third team to eat more cap to fit Giroux. That or a contract needs to go back the other way. However, maybe they go with another cheaper forward instead.

The Avs could use one more guy in the top six to help replace what Brandon Saad brought last season. However, that is really being greedy for an already stacked team. Maybe a cheaper option like Marcus Johansson or Calle Jarnrok is the way they look? Some scoring depth to shore up the third or fourth line. The Avs have shown at different times in the playoffs you can always use more depth.

Analysis: With the recent surge the Stars have been on maybe this shouldn’t be shocking. It seems likely Klingberg will be gone this summer but it’s entirely possible Dallas fancies themselves a darkhorse playoff contender. After all, they did make that run in the bubble with a very similar core. They also locked up Joe Pavelski for another year so it looks like they may want to go for a run.

It will be interesting to see if this is the right call long-term. It’s hard because they have a solid team, but are they good enough to compete with the teams such as Colorado? Selling Pavelski, Klingberg, and even names like Braden Holtby and Alexander Radulov would have immediately kick-started a rebuild and maybe even given enough assets it was simply a retool. Instead, they’re committing to this core. We’ll have to see how it plays out.