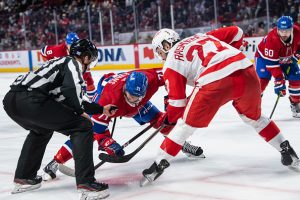 Welcome back to another day of NHL Predictions. Each day, Last Word on Hockey takes a look at the games that are happening and gives our predictions for each one, breaking down head-to-head and other factors that may play in. We also have a featured game of the day, which is considered much-watch TV. Today’s NHL Predictions featured game is the Montreal Canadiens vs Detroit Red Wings.

Although this game may seem like an easy gimme for the Lightning, it may not be the case considering how the offseason went.

with Johnny Gaudreau on the team, they should offensively be better than before against a still decently strong Tampa Bay Lightning team. However, the  Blue Jackets lost forward Patrik Laine yesterday in their  4-1 loss to the Carolina Hurricanes.

Both teams got hit hard with their previous matchups, as the Lightning lost 3-1 to the rangers in a Mika Zibanejad 2-goal night.

Hopefully, for the Jackets, this is a chance to prove that they still can prove their relevancy, and give a chance for Johnny Gaudreau to fill in the all-star role that hasn’t been filled since Artemi Panarin left the team for free agency. For the Lightning, it wouldn’t be surprising to see them lose this game, as they’ve been Stanley Cup finalists for the past three years.

This game between the Detroit Red Wings and Montreal Canadiens is going to be a close game filled with lots of hidden stories going into it, like Ben Chiarot‘s return to the Bell Centre, the recent play of the rookies, and so much more.

Also, 6-foot-8-inch red wings rookie Emil Soderblom has been turning a lot of heads. This is due to his larger size and skill set.

Considering Detroit’s goaltending hasn’t been spectacular as of recently with the only highlight being Ville Husso, Montreal’s offense may be an advantage for the Habs against Detroit.

Although, Detroit’s youngsters may propel them for the win, as they have been impressive as of late.

Although the Winnipeg Jets haven’t played a regular season game, this may not turn out so well for them.

The Rangers have been lethal over the past two games. They have really proved that their Eastern Conference Finals appearance wasn’t just a fluke.

Although the Jets could shake off the rust from last year, and get started off on the right foot. However, considering how bad they were in the preseason, this game may not end that well.

The Carolina Hurricanes got off to a good start in their first game, with a convincing 4-1 win over Columbus. This makes them look like a pretty strong candidate to win the division, even though it’s only one game in.

The San Jose Sharks have been as expected: not great. They dropped two straight games to the Nashville Predators, and are now facing a really strong Hurricanes squad.

Basically, the Sharks don’t have much of a chance to squeeze a win out of this game, especially because the Hurricanes walked all over an arguably much stronger Blue Jackets team.

That isn’t to say it’s impossible, the Sharks very well could start off the game on a strong foot thanks to Timo Meier and Logan Couture, and if James Reimer starts, he could very well be an anchor they need in order to pull it off.