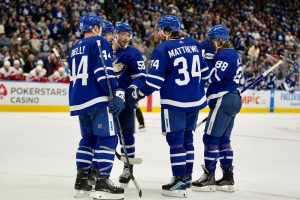 Welcome back to another day of NHL Predictions. Each day, Last Word on Hockey takes a look at the games that are happening and gives our predictions for each one, breaking down head-to-head and other factors that may play in. We also have a featured game of the day, which is considered must-watch TV. Today’s featured game is the Toronto Maple Leafs vs Montreal Canadiens.

In an eastern conference matchup to start the season, both teams will be without star players. On Washington’s side, first-line center Nicklas Backstrom, and feared enforcer Tom Wilson will be absent. On Boston’s end, superstar Brad Marchand, and top-pairing defender Charlie McAvoy won’t be dressed. Needless to say, this first game of the season will not be the best for either team.

This game does however note several interesting storylines. Alex Ovechkin will begin his mission to pass Gordie Howe in goals (780 for Ovechkin, 801 for Howe), for second all-time behind Wayne Gretzky. Washington’s fresh goaltending duo of Darcy Kuemper and Charlie Lindgren will also see its first regular-season action. For Boston, veteran David Krejci will be making his return from Czechia, and will hopefully be an impact piece for the team.

A Metropolitan division matchup, the Blue Jackets and Hurricanes are both searching to establish themselves in the division. While Carolina made significant changes in the off-season, such as bringing in Brent Burns, and Max Pacioretty (who will be sidelined with injury long-term), it was Columbus who made the biggest off-season move. Signing free agent superstar Johnny Gaudreau to a seven-year deal, Columbus is looking to perform above the ~.500 point percentage they’ve been hovering around for the past few seasons.

The Hurricanes are hoping to contend for a Stanley Cup this season and will come out the gate strong with one of the scariest rosters in the league. However, despite the ferocity and skill of the Hurricanes, the free-agent magic of Gaudreau could bring Columbus to victory.

Nick Suzuki will be playing in his first game as Canadiens captain, and Evgenii Dadonov, Sean Monahan and Kirby Dach will make their debut in blue-blanc-rouge. Dadonov had a rough camp and will be delegated to fourth-line duties alongside Jake Evans and Rem Pitlick. Monahan impressed during camp and will earn some middle-six minutes. Finally, draft-day acquisition Dach will center the teams’ second-line, and second power play. For the Leafs, John Tavares appears to be recovered from his injury woes and might play. They will equally deploy a refreshed fourth line featuring Nicolas Aube-Kubel and Zach Aston-Reese.