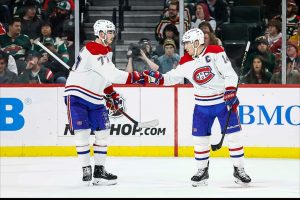 Welcome back to another day of NHL Predictions. Each day, Last Word on Hockey takes a look at the games that are happening and gives our predictions for each one, breaking down head-to-head and other factors that may play in. We also have a featured game of the day, which is considered must-watch TV. Today’s featured game is the Montreal Canadiens vs Winnipeg Jets.

Let’s start these NHL predictions with a question. What has happened to the St. Louis Blues? After starting the season 3-0, capitalized by a shutout of the Edmonton Oilers, they’ve now sunk five straight regulation losses. A quick glance at the numbers shows that this is a team that is failing on multiple fronts. They’re 32nd in terms of goals for per game, 27th in terms of goals against per game, and according to MoneyPuck, 25th in terms of expected goal percentage at even strength. It’s ugly no matter which way you slice it.

The New York Islanders are on the complete opposite side of the fence. They’ve rattled off four straight wins and sit top 10 in goals for and against. Ilya Sorokin has been dominant in the blue paint, and it’s fair to expect that trend to continue tonight. As of right now, the Blues are outclassed in every facet of this matchup.

Two teams with almost identical records meet tonight, as the Seattle Kraken visit the Minnesota Wild. For the Kraken, they most likely welcome their 5-4-2 record. They disappointed last year compared to expectations, but this season they look a lot more competitive. They just completed a third-period comeback against the Calgary Flames and Matty Beniers looks every bit as good as advertised with nine points in 11 games.

The Minnesota Wild aren’t quite as happy with their 5-4-1 record. They started the season shakily, coming into the year with massive expectations, but have corrected a little bit recently with two straight wins. Kirill Kaprizov has been sensational with 13 points in 10 games and will be needed to continue to outscore his team’s subpar goaltending.

On paper, these two teams are closer than expected, but the Wild have the best player in the matchup and are at home.

The Los Angeles Kings look a bit like Dr. Jekyll and Mr. Hyde this season. Where they excel is in their offensive numbers, both in terms of raw goals scored, and in their underlying expected goal and shooting percentages. Where they struggle is in keeping the puck out of their net, with below-average goaltending and a tendency to make costly mistakes at the wrong time. It’s what’s landed them a 6-6 record to this point, a genuine tale of two extremes.

Believe it or not, those circumstances might set up well for the Chicago Blackhawks. Remarkably, goaltender Alex Stalock might just give them an edge in net (at least based on this year’s numbers). Not only that, but this Blackhawks team has shown an ability to punch back with a surprisingly dynamic offence. Patrick Kane has seven points in his last five games, Andreas Athanasiou is scoring ridiculous goals, and even their blue line is chipping in with points across the board. If the Kings get sloppy, the Blackhawks have plenty of talent to take advantage.

Are the Winnipeg Jets really the second-best team in the Central Division? Probably not, but they do have Connor Hellebuyck, and with the way, he is playing that might be all they need. According to MoneyPuck, Hellebuyck is third in the league in terms of goals saved above expected with a 7.4 mark in only seven games. His core numbers look great as well, with a 2.41 goals-against average and a .931 save percentage.

The Jets themselves are actually in the bottom third of the league in terms of expected goals percentage, but sit top five in terms of save percentage. Hellebuyck’s play has carried an otherwise underperforming team to a 5-3-1 record, and if last year’s New York Rangers are any indication, that can go a long, long way.

Hellebuyck is reason alone to be critical of the Montreal Canadiens’ chance to win tonight. Their offence is struggling as is with only 2.8 goals per game, so it doesn’t seem likely for that to improve too much against one of the league’s best netminders.

Also worth noting is that both squads sit near the bottom of the league in terms of power play percentage (both in the 13% range), and both teams have just average penalty kills. There is nothing special about either side’s special teams.

Now, for our last NHL predictions of this piece… Considering the above factors, this one seems destined to be a low-scoring struggle. In that event, the home team with the historically better goaltender gets the win.