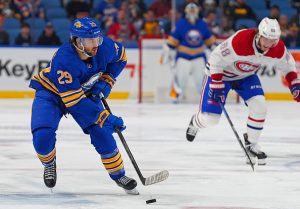 Welcome back to another day of NHL Predictions. Each day, Last Word on Hockey takes a look at the games that are happening and gives our predictions for each one, breaking down head-to-head and other factors that may play in. We also have a featured game of the day, which is considered must-watch TV. Today’s featured game for NHL Predictions is the Buffalo Sabres vs the Montreal Canaidens.

It’s a light night on the docket as this Atlantic Division battle is our feature game. Buffalo’s promising start has done to a thud as its lost six straight games. There is some good news as Mattias Samuelsson, Zemgus Girgensons and Tyson Jost will all be in the lineup. The latter was a recent pickup via waivers just recently. Craig Anderson likely gets the start in between the pipes for the Sabres. Tage Thompson leads the way in goals with 12 while Rasmus Dahlin is tops in assists with 13.

The Habs have wins in three of their last five and stopped a two-game skid with a 5-4 shootout win over the Philadelphia Flyers. Youth is being served as Cole Caufield has 11 goals already and Kirby Dach has 12 assists. Both young forwards as well as Nick Suzuki are flourishing under head coach Martin St. Louis. Jake Allen likely gets the start for the Canadiens in net.

Buffalo gets some needed reinforcements, but Montreal is a fun team that’s got a bright future ahead of it.

Our final game of the night is a matchup between two big-market teams. The New York Rangers have three wins in their last five and shown flashes of being the Stanley Cup contender that some have wanted to see. However, they’ve had some pretty bad games. Igor Shesterkin gets the start and this can be helpful if you want to take the under of six. Mika Zibanejad has 10 goals this season and Artemi Panarin leads in assists with 17 so far for the Rangers. New York’s special teams are great with the ninth-best power play and fourth-best penalty kill this season.

The Los Angeles Kings are coming off a pair of losses, including a 3-2 setback to the Seattle Kraken. Cal Petersen will be the likely starter in goal for the Kings. Gabriel Vilardi leads the team in goals with 10 while new acquisition Kevin Fiala in first in assists with 12. The Kings have struggled on special teams this season as they’re 24th on the power play and 27th on the penalty kill.

Los Angeles is going to have to stay out of the box if it wants to get back into the win column. The Rangers continue their good fortune out of the road.