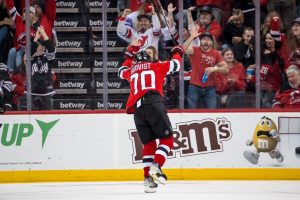 Welcome back to another day of NHL Predictions. Each day, Last Word on Hockey takes a look at the games that are happening and gives our predictions for each one, breaking down head-to-head and other factors that may play in. We also have a featured game of the day, which is considered must-watch TV. Today’s featured game for NHL Predictions is the New Jersey Devils and Montreal Canadiens.

The Dallas Stars are off to a hot start and have been staying at the top of the Central Division. They are riding hot goal-tending from Jake Oettinger who recently came back from an injury. He sits at a save percentage of .938% and a goals against average of 1.80. Not only are they not allowing many goals, but they are also scoring a lot of goals. In their nine wins, they have outscored their opponents 43-12. Their biggest contributor thus far is Jason Robertson who has tallied 10 goals and 23 points. There are only two players in the league to score more than him and that is Connor McDavid and Leon Draisaitl.

The Tampa Bay Lightning are off to an 8-6-1 start. They have been plagued with injuries, which include Zach Bogosian and Anthony Cirelli who both had surgery on their shoulders. Nikita Kucherov is off to a hot start, also tallying 23 points. Captain Steven Stamkos has seven goals in 15 games. However, the stellar goaltending the Lightning have seen in previous years is not what they are currently getting from Andrei Vasilevskiy. He sits at a save percentage of .898% and a goals against average of 3.10.

The Toronto Maple Leafs are coming off a back-to-back, where they lost to the Pittsburg Penguins and defeated the Vancouver Canucks. After a slow start, Auston Matthews finally found the back of the net. It also seems the Maple Leafs have found their footing after a little panicking by the fans at the beginning of the season. John Tavares is leading the team with eight goals. And their goaltending issues have seemed to settle down. However, it was announced that Jake Muzzin will be out indefinitely due to spinal surgery, which could allow them to add a piece to their roster.

The Penguins began the season with a seven-game losing streak, but are now on a three-game winning streak. During their losing streak, Pittsburgh was outscored 33-16. Their goaltending tandem of Casey DeSmith and Tristan Jarry will have to perform better moving forward. Jarry’s goals-against average is currently at 3.55. Evgeni Malkin and Sidney Crosby are the team’s only point-per-game players, both with 16 points. Jake Guentzel leads the team in goals, with eight.

The Vancouver Canucks have found themselves at the bottom of the league. Starting the season at 4-9-3. One of the biggest surprises to the beginning of this season is goaltender, Thatcher Demko is off to a 1-8-2 start. Demko has had a solid career up until this season. But it is going to require the help of his team to recover from this start. On the other hand, Bo Horvat has recorded 13 goals in 16 games.

The Buffalo Sabres are currently on a five-game losing streak after a surprisingly hot start. They are getting decent games out of Eric Comrie. But the real story for the Sabres has been Tage Thompson. This off-season he signed a seven-year, 50 million-dollar deal that starts next season. In the last game of October, he recorded a six-point game, including a hat trick.

The Washington Capitals are 7-8-2 on the season. A slower start than most predicted. The absence of Tom Wilson can be felt on the score sheet and in the physicality of the game. Alexander Ovechkin recently broke the record for most goals with a single franchise at 787 goals. He is now a little over 10 goals behind Gordie Howe.

The biggest move of the off-season for the Florida Panthers was trading Jonathan Huberdeau and MacKenzie Weegar for Matthew Tkachuk. Tkachuk has recorded five goals and 17 points in his 15 games as a Panther. After winning the President’s Trophy and losing in the first round of playoffs, Florida made a coaching change. It appears there have been some growing pains and adjustments under the new head coach, Paul Maurice. However, the Atlantic Division will be a tight one, so Florida will have to figure it out soon.

The Philadelphia Flyers have off to a chaotic start. There are a lot of issues, but they are riding one of the hottest goaltenders in the league. Carter Hart has a save percentage of .937% and a goals against average of 2.18. But the rest of the team hasn’t been much to write home about. Travis Konecny has gotten off to a great start, recording 17 points. However, the Flyers are on a three-game losing streak.

The Columbus Blue Jackets are fighting for last place. They are 4-9-1 through their first 14 games. And to add insult to injury, literally, they have lost a couple of players to injuries. Patrik Laine will be out for a few weeks due to a sprained ankle. The Blue Jackets also announced that Zach Werenski will be out for the remainder of the season.

The New Jersey Devils are third in the league and have been one of the most surprising teams thus far in the season. They are 12-3-0 and are on a nine-game win streak. They have outscored their opponents 38-18 during their win streak. They have the fourth-best goal differential in the league at +17. The Devils have three point-per-game players: Jesper Bratt, Nico Hischier, and Jack Hughes. Their defencemen are also getting their fair share of the scoresheet as well.

Vitek Vanecek has been solid for the Devils. He lost his first game and has not lost since. He is at 6-1-0 with a .909% save percentage. New Jersey has had some issues on the goaltending front with injuries, but if Vanecek can stay healthy and get some occasional support from his backup, the Devils look unstoppable at the moment.

The Canadiens are also on a winning streak of their own, however, it is only three games to the Devils nine. But they have been doing things on their own. Nick Suzuki and Cole Caufield have a combined 19 goals and lead the team in points. This young team is making a name for itself and it is very apparent they will be a solid team in the years to come.

Montreal currently has the same amount of points (17) as four other teams in their division. Canadiens goaltender Jake Allen is 5-5-0. He has a save percentage of .902% and a goals against average of 3.19. Their division will be tight for the remainder of the season, so the team is going to need the goaltending to steal them a few games moving forward.

You rocked The Rock tonight. pic.twitter.com/j6W2HAP4Ly