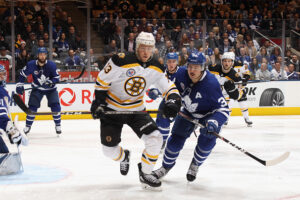 Welcome back to another day of NHL Predictions. Each day, Last Word on Hockey takes a look at the games that are happening and gives our predictions for each one, breaking down head-to-head and other factors that may play in. We also have a featured game of the day, which is considered must-watch TV. Today’s featured game is the Toronto Maple Leafs vs Boston Bruins.

The Carolina Hurricanes are at a slight rest disadvantage in this one. Even though both teams are playing their third game in four nights, the Hurricanes are the only one on the second half of back-to-back. Last night, Carolina walloped the Washington Capitals 6-1 and padded their Metropolitan Division lead even more. Tonight, they’ll face a stiff test versus the Tampa Bay Lightning.

In terms of this season, the Lightning have struggled against the Hurricanes. Carolina has won both earlier matchups, including last week’s 3-2 decision. Tampa will have the advantage of playing at home tonight though, and have won two in a row.

Each team will be a little leg weary, and that could work to the Hurricanes’ advantage. If they can engage the Lightning in more loose style of high-event hockey, then Carolina should have the edge. Especially with the way their offence is firing as of late.

Look for Jonathan Huberdeau to stay hot, as he has six points in his last four games. He’s at 90 on the season and should hit 100 relatively quickly.

Is Sidney Crosby getting enough attention for his great play this year? It’s possible. No, Crosby isn’t on track to score more than 50 goals, and no he isn’t even on track to get 100, but he’s had a stellar season nonetheless. He has 69 points in 55 games this year and is the main driver of the Pittsburgh Penguins ascension up to second place in the Metro. He has 10 points in his last five games.

The lone blemish in Crosby’s recent hot streak was last week’s matchup against the New York Rangers. Crosby ended up minus two as the Rangers secured a decisive 5-1 victory. Tonight, they’ll do battle again, this time with second place in the division up for grabs.

This should be a lot closer than the last one, and the Penguins are coming off of a massive 11-2 win against the Detroit Red Wings on the weekend. They’ll hold on to second place with a win on home ice.

Not much on the line in this tilt. Each of these teams would need to be more or less perfect down the stretch to have any chance at the playoffs, and that’s just not going to happen. As a result, both will end up in that terrible middle of the standings, where the playoff dreams are dashed, but the draft lottery is a long shot. It doesn’t give either fanbase much to cheer for, other than a hurried end to this season, and a restart next year.

The Islanders do have an edge in goaltending and Brock Nelson is on a bit of a roll. They should be able to nab the win tonight.

Is it possible that we get another playoff series between the Toronto Maple Leafs and Boston Bruins? Yes, actually, but it’ll take a bit more maneuvering down the stretch for it to happen. For now, we’ll have to settle for a stellar showdown for third place in the Atlantic Division.

The Leafs and Bruins are one of the premiere matchups in the league and tonight’s game comes at a great time. On Toronto’s end, things are buzzing. Mitch Marner has 10 points in his last five games, Auston Matthews is knocking on 50 goals this season with 48, and even Erik Kallgren has represent a (very) small-sample bright spot in net.

In terms of the Bruins, the team as a whole is dominating. They are 8-1-1 in their last 10, and have won four straight. They also haven’t lost at home since March 7th. Their best players are playing some great hockey as of late too, as David Pastrnak has four goals in his last two games after a short slump and Brad Marchand has seven points in his last five.

Boston has been rock solid at home ice as of late, and the Leafs are a bit more vulnerable on the road. Plus, even with the recent up-tick in the blue paint for the Leafs, it’s hard to have real faith in their goaltending, especially against a rolling Bruins team. All that adds up to a win for the Bruins.