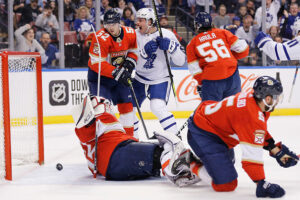 Welcome back to another day of NHL Predictions. Each day, Last Word on Hockey takes a look at the games that are happening and gives our predictions for each one, breaking down head-to-head and other factors that may play in. We also have a featured game of the day, which is considered must-watch TV. Today’s featured game is the Florida Panthers vs Toronto Maple Leafs.

Minnesota sits squarely in the playoff race out West, and wants to bank as many points as possible down the stretch. They want points just to ensure a playoff berth. Colorado, on the other hand, wants points to try and secure a second consecutive President’s Trophy. Regular season success only goes so far once the postseason starts, though. The Avalanche know that all too well, after a third-straight second round exit last year. These two clubs could meet in the postseason, but have tonight and one more matchup left in regular season play. Colorado took both of the first two matchups, most recently via a 4-3 shootout victory in January.

Both Colorado and Minnesota made splashes in the trade market last week, acquiring pieces to aid their postseason outlooks. Hands-down the most interesting pickup between these clubs came from Minnesota. They acquired future Hall-of-Famer Marc-Andre Fleury, who brings an abundance of experience and success with him. That could dramatically affect their playoff run, as Fleury has been known to do.

Defenceman Josh Manson, plus forwards Nico Sturm and Andrew Cogliano all jumped into the Avs’ lineup immediately. Their depth will benefit from those acquisitions, and hopefully Artturi Lehkonen can be available soon too. He came over via trade, but due to immigration issues hasn’t appeared in a game to date. These teams should provide a playoff-style battle tonight, as they gear up for the most important time of the year.

Since hiring Martin St. Louis as their head coach, the Habs look considerably stronger and more competitive. After their abysmal 8-30-7 start under Dominique Ducharme, the team actually sits above the .500 mark in St. Louis’ 20 games behind the bench. New Jersey sits near the bottom of the standings too, along with Montreal.

Though neither team has playoff aspirations this year, both want to take steps in the right direction for next year. New Jersey continues to grow its youngsters, led in scoring by Jesper Bratt, Jack Hughes, Nico Hischier, Dawson Mercer, and Yegor Sharangovich. All five of those players lands at 23 years old, or younger, inspiring plenty of optimism for what is to come. They need more from their defence and goaltenders; no Devil goalie owns a goals-against-average under 3.00 per game, with hardly any advanced statistics in the blueline’s favour.

If any one player has benefitted from the coaching change in Montreal the most, it’s Cole Caufield. Since the change, Caufield scored all but one of his 13 goals on the season. His pace to-date now could’ve meant a 30-40 goal year, on the conservative end. This team needs any feel-good story they can find, but ultimately wants to draft as high as possible this summer, too.

Winnipeg needs this game. They sit right on the outside of the playoff bubble looking in. With the Dallas Stars sitting above them, with games in hand too, Winnipeg is running out of time. There’s more in the mix besides Dallas, but the next glut of teams (St. Louis, Minnesota, Nashville, Los Angeles…) would need to take a significant tumble down the stretch for Winnipeg to pass them.

Arizona, meanwhile, really has nothing left to play for this year. Clayton Keller has been great, at nearly a point-per-game pace in what will become a career-high in points by season’s end. Nick Schmaltz, too, is scoring at a better clip than ever before. Then there’s Karel Vejmelka, who appears to be the team’s bonafide starter after a contract extension last week too.

Beyond those players, Arizona has next to nothing. They continue what feels like a perpetual rebuild, with more rocky road ahead. To top it all off, the team expects to play in Arizona State’s college stadium for the foreseeable future, beginning next season. Again, Winnipeg needs this game. If they can’t beat this Coyotes club when everything is on the line, they aren’t scaring anyone out West.

This marks the first of three heavyweight tilts between two contenders out East. The rich got richer at the trade deadline, especially in Florida. Claude Giroux, Ben Chiarot, and Robert Hagg all jumped on the Cats bandwagon, immediately making a difference with four combined points in their first game with the club. Their lineup looks like as deep and talented as a team can be in the salary cap era.

But we’ve heard this story before, like after John Tavares joined the Leafs. Yet here we are, multiple seasons later, and that same team remains without a single playoff series win. At the end of the day, all that matters is how the team performs at the most important time of the year. With three matchups in the last month of the regular season, expect some major playoff atmospheres in these tilts.

Jonathan Huberdeau quietly set the NHL record for most assists by a left winger in a single season, too. With just under 20 games to go, he’ll blow the previous record out of the water. Auston Matthews will eclipse 50 goals for the first time in his career this season, and could shoot for 60 with plenty of time left. These teams are both so fantastically dynamic; here’s hoping for a great battle tonight to foreshadow a potential playoff matchup.