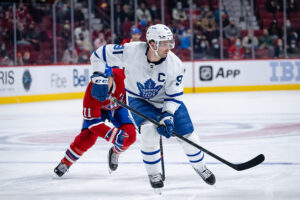 Welcome back to another day of NHL Predictions. Each day, Last Word on Hockey takes a look at the games that are happening and gives our predictions for each one, breaking down head-to-head and other factors that may play in. We also have a featured game of the day, which is considered must-watch TV. Today’s featured game is the Toronto Maple Leafs vs Montreal Canadiens. Be sure to check out our other predictions as well.

It’s the final meeting of the season between the two teams. The Isles are winners of four of their last five, including two straight. New York has played better in the second half, but it’s too little too late. Semyon Varlamov likely draws the start for the Islanders in this one.

Linus Ullmark gets to start for the Bruins, who have been on a roll. Boston has won four of its last five, including three in a row. The Bruins have been solid on defence by giving up just two or less goals in those four wins.

The under of 5.5 could be a tempting number since both are solid on defence. Boston will have just a little more punch to win.

Tampa is in the unfamiliar position of being in a Wild Card spot as of this time. However, they are still a dangerous squad. The Lightning have losses in three straight, but have 10 goals in the two meetings with the Wings. Andrei Vasilevskiy probably starts in this one to stop the bleeding.

Detroit has fared a little better in recent games, but are coming off a 5-2 to loss to the Islanders. Alex Nedeljkovic likely gets the start for the Red Wings in this one. The Wings defence gave up seven goals in the first meeting between the two teams.

Tampa’s offence should get healthy against a young Detroit team.

Chicago finally got a regular season win over Vegas for the first time earlier in the season. Kevin Lankinen gets the call in between the pipes for the Blackhawks in this one. Chicago has one three of its last five games.

Logan Thompson likely starts due to the injury to Robin Lehner, who could be out for a while. Vegas is in the unfamiliar position of having to sweat out its playoff fate. However, the Golden Knights got a huge 6-1 win over the Nashville Predators last game.

Vegas is in desperation mode, so they’ll be in need of points here.

Erik Kallgren gets the start for the Maple Leafs in this meeting of old rivals. Toronto has wins in three of its last five, including a 3-2 victory over the New Jersey Devils last time out. The Leafs offence is third in goals for and first on the power play. Toronto would meet Boston in the first round if the Stanley Cup Playoffs today.

Jake Allen receives the call for this game for the Habs. Montreal has played better under head coach Martin St. Louis with Cole Caufield being the benefactor. Montreal’s penalty kill is 28th and it’s 30th in goals against. However, the Canadiens have been better under St. Louis.

These rival games are tough to gauge, but the Leafs will take a tight one.

The Panthers boast the league’s top offence with 256 goals and ninth-best power play. Sergei Bobrovsky likely gets the start, but always check online before setting your lineups in daily fantasy. Florida has two straight victories, including two in a row.

Ottawa did get an 8-2 win over Florida earlier in the season. However, they were blanked 3-0 in the last encounter. Anton Forsberg probably draws the start in this one, but will be missing Thomas Chabot on the blueline.

Florida’s offence is pretty spectacular, so it should win here.

It’s the final meeting of the season between the two teams. The Devils won the last game 4-3 in overtime, but have lost four of their last five games. New Jersey’s defence have given up six goals in three of those losses and not made life easy for probably start Nico Daws.

Washington is coming off a 4-3 win over the Buffalo Sabres last night. Vitek Vanacek likely starts for the Capitals in this one. Alex Ovechkin got his 41st goal of the season in the overtime victory.

Picking winners on back-to-back games can be hard, but the Caps offence will have enough in the tank.