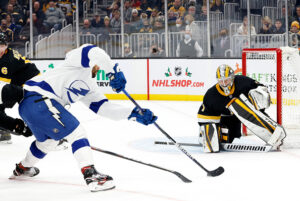 Welcome back to another day of NHL Predictions. Each day, Last Word on Hockey takes a look at the games that are happening and gives our predictions for each one, breaking down head-to-head and other factors that may play in. We also have a featured game of the day, which is considered must-watch TV. Today’s featured game is the Tampa Bay Lightning vs Boston Bruins.

The Montreal Canadiens have been playing better hockey since their coaching change, but this is still a flawed club. They’ve lost three of their last four, and in terms of season totals, they remain at the bottom of the pack in goals per game, goals against per game, and both sets of special teams.

The Florida Panthers, on the other hand, are one of the very best in the league. Their only blemish is their road record, which contains only two less losses than wins, but that’s a minor gripe. Plus, Montreal is a miserable 9-18-4 at home, anyways. Add in the fact that Claude Giroux is making his debut after recently being traded and that should provide all the momentum the Panthers need.

Prediction: Panthers win 5-2 and Giroux gets a goal in his debut

The Dallas Stars are right in the midst of a vicious battle for the playoffs. They’ve been slugging it out in the wild card for weeks now and have worked their way into the last playoff spot in the west as a result. They are 6-4 in their last 10, which doesn’t seem too great, but consider the fact that they’ve done it mostly without star defenceman Miro Heiskanen. That’s no easy task, but the Stars have mostly held their own. They’ll be desperate for a point or two tonight.

The Carolina Hurricanes aren’t nearly as desperate, as they’ve jumped out to a decent lead in the Metropolitan Division. Despite that, the Hurricanes aren’t taking it easy. They are fresh off of a win against the Tampa Bay Lightning and only improved on trade deadline day. The Hurricanes also have a killer instinct on home ice, while the Stars are actually below .500 on the road. Add in the decisive advantage in special teams for Carolina, the fact that Dallas is missing its top blue-liner, and the Hurricanes look to have the edge.

Even though these types of late-season games between weak teams lack in terms of postseason implications, there are usually a couple star players worth tuning in for. In this case, Moritz Seider of the Detroit Red Wings fits the bill. The Calder Trophy candidate has caught the league by storm with his dynamic defence. He has 42 points in 63 games which shows that he can score, but he’s also been on the highlight reel lately for some crushing hits. He’s averaging 23 minutes of ice-time a night for the Red Wings in what has been nothing short of an exceptional rookie campaign. He’s worth your attention.

The New York Islanders are rolling as of late, with a 7-2-1 record in their last 10. They also hold advantages in special teams, and goals against per game. Despite that, this seems like a game where Seider could dominate and cause fits for the Islanders. He’ll improve his argument for the Calder with a couple of points over the Islanders and a victory for his team.

If the Winnipeg Jets, somehow someway, find themselves back in a playoff spot by season’s end, they’ll have Kyle Connor to thank. The winger has a whopping 13 points in his last five games. The Jets, in turn, have won four of those games. It’s a late season surge for a team that looked well out of it just a couple of weeks ago. As a result, they’ll be hungry to keep that momentum going tonight against a weak Ottawa Senators team.

The Senators have had some up and down moments this season, but are in a downbeat lately. They only have one win in their last six games and recently lost star defenceman Thomas Chabot to a broken hand. This should be a tough one for the Jets to lose.

This is a sneaky good matchup for a Thursday night between two Atlantic Division rivals. Most people would likely give the edge to the Tampa Bay Lightning, but the Boston Bruins deserve some respect too. At a glance, the Bruins aren’t too far behind the Lightning at all.

In fact, a regulation win for Boston would bump them ahead of the Lightning for third in the division. Tampa Bay in the wild card? It seems a little preposterous, but that could be the scene tonight.

Unfortunately for the Bruins, they’ll have to wait just a touch longer to outright seize third place. This one will be close and will likely need extra time.  The Bruins are playing at home, so they’ll get the nod this time.