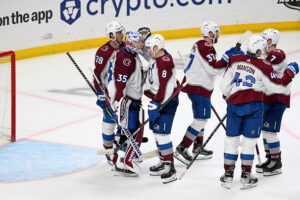 Welcome back to another day of NHL Predictions. Each day, Last Word on Hockey takes a look at the games that are happening and gives our predictions for each one, breaking down head-to-head and other factors that may play in. We also have a featured game of the day, which is considered must-watch TV. Today’s featured game is the Edmonton Oilers vs Colorado Avalanche.

Not much has changed since the last time the Boston Bruins and Montreal Canadiens met. The Canadiens remain among the league’s worst teams, while the Bruins aim to protect their playoff spot. Charlie Coyle‘s three assists helped Boston defeat the Winnipeg Jets on Friday. He has a total of seven points through his last five games. Cole Caufield has similarly been heating up for Montreal, with seven points through four games. (Of those, five were goals.) That being said, the Bruins should come away with a pretty decisive victory.

Though the Vegas Golden Knights have fallen to fourth in the Pacific Division, they enter this game having won their last two games. The Minnesota Wild, too, have a good bit of momentum with a similar winning streak under their belts. For Vegas, backup goalie Logan Thompson has been solid, putting up a total of 71 saves on 75 shots during his two most recent starts. For Minnesota, Kirill Kaprizov and Ryan Hartman have both been on point-per-game paces through their last five games. While the Golden Knights are a strong team, the Wild should get their first win of the season series tonight.

Tonight, the Edmonton Oilers and Colorado Avalanche will face off for the first time this season. The Avalanche remain the team to beat in the NHL, with a league-leading 93 standings points. The Oilers, while not having Colorado’s level of consistent success, are currently on a five-game winning streak.

For the Avalanche, Darcy Kuemper has been spectacular as of late. His most recent two starts were both shutouts – in one of those, against the Calgary Flames, he made 46 saves. Nathan MacKinnon has also been dangerous, as expected. He has nine points (three goals and six assists) in his last five games. On the Oilers’ end, goaltending still isn’t very consistent. However, they’ve been able to compensate by scoring an average of 5.4 goals per game during their winning streak. As always, Connor McDavid and Leon Draisaitl led the charge, scoring a combined 18 points through that stretch.

Though Edmonton’s offence has been firing on all cylinders, it won’t be enough to overcome a Colorado team that’s strong on all fronts. Expect the Avalanche to get the win.

The Anaheim Ducks are currently on a six-game losing streak, which has left them in sixth in the Pacific Division. The Nashville Predators, on the other hand, are in a fairly solid playoff position. Anaheim’s lineup will take on a different configuration for this game, as they traded Nicolas Deslauriers and Hampus Lindholm away before the deadline. On Nashville’s end, Roman Josi continues to rack up points at a terrifying pace, with three or more points in each of his last four games. Given the Ducks’ current trajectory, it should be safe to bet on the Predators to win again this time around.